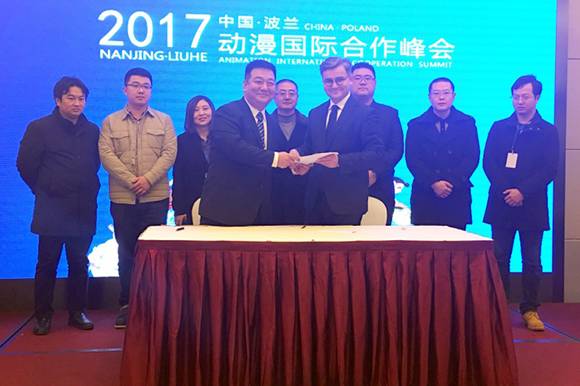 WARSAW: Polish Animoon Studio and Chinese Animex Animation finalised the agreement on the coproduction of the second season of the Polish animated series Hug Me. This is the first animated coproduction between the two countries.

The announcement was made in the Chinese city of Luchu on 4 December 2017, during a special conference on to the co-operation between Poland and China in the field of animation, and follows a preliminary agreement that was signed during the Annecy International Animated Film Festival and Market in June 2017. The project was also developed during MIPCOM at Cannes.

tThe Chinese company Animax had to obtain a special permission from the Government in order to enter the coproduction, and will be responsible for part of the animation and also for introducing the series to the Chinese market.

Hug me / Przytul mnie is a 2D animated series based on the book Please Hug Me / Proszę mnie przytulić written by Przemysław Wcheterowicz and Emil Dziubak, and published by wydawnictwo Ezop. The series follows Father and Teddy, two bears who live in a forest.

The first series of the show, which premiered on Puls 2 on 15 April 2017, was produced by Animoon Studio in coproduction with Studio Pigeon, Studio Spot, LSW and Bartosz Wierzbięta. The series received production support from the Polish Film Institute.