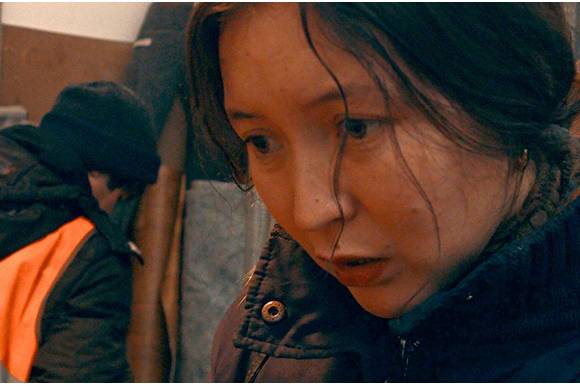 CANNES: Director Sergey Dvortsevoy arrives in the Cannes with Ayka a grim tale that follows the life of an unemployed woman from Kyrgyzstan who spends five desperate days on the winter streets of Moscow after giving birth to a baby she cannot afford to care for at a Moscow maternity hospital.

International audiences will remember Dvortsevoy for his 2008 film Tulpan which screened in the Cannes Certain Regard selection in 2008 before going on to screen at international festivals around the world.

Ayka played by Samal Yeslyamova is a a 25-year-old Krygyz illegal migrant who has landed on the streets of Moscow.  She has fled from her home in her native Kyrgyzstan where the Mafia who are chasing her for bad debts. She has just given birth to a baby which she abandons in a Moscow maternity hospital climbing out a window and taking off into the streets of the city during a harsh blizzard.  She is still bleeding from giving birth and she has to deal with her painful milk-filled breasts that remind her of the baby she abandoned.

Throughout the film we hear the ringing of her unanswered mobile phone as we begin to get bits of her history before she abandons her baby and the responsibilities of motherhood.  Given her desperate circumstances it is not surprising that she takes the option of abandoning her newborn baby.  The only question is why she ever decided to give birth in the first place in such difficult conditions.

Dvortsevoy hails from Kazakhstan where the economy is significantly better than its Central Asian neighbours and its gas, oil and mineral wealth provides its population with a better social safety net.  While Kazakhstan exports far fewer migrant workers to Russia than neighbouring countries you definitely get the feeling that Dvortsevoy has an exceptional insight and a sympathy for the plight of these illegal migrants. The script was written by Dvortsevoy together with Gennady Ostrowskii.

Ayka shows us man’s inhumanity to man as she encounters exploitation and a lack of human sympathy for her plight.  As an illegal legitimate businesses decline to employ her without documentation.  Those who do employ illegal migrant labour tend to exploit the young woman. Samal Yeslyamova turns an intense and moving performance in a visceral role that takes a no holds barred stance in showing just the depths of misery and suffering she confronts. We see for example a filthy chicken slaughterhouse where Akya and her colleagues work where the boss feels no compunction in going off without paying them.  Working illegally they have no way to fight back or protect themselves from such exploitation.

The story gives us the background of how Ayka ended up in such dire straits a little bit at a time as we follow her during her five days on the streets of Moscow in a snowy landscape. We finally see her getting a job for awhile as one of Moscow’s winter army of snow shovellers.  It is not a tale for the faint hearted with plenty of post maternity bleeding, milk squeezed from swollen mother’s breasts and other physical suffering shown in grim detail.  Akya’s determination to survive in such a grim setting seems almost like an unconscious decision rather than any logic that life will get better.

This will be a tough sell for anything outside the festival circuit but the intense performances and the unembellished look at the fate of illegal migrant workers makes this film timely and sure to be invited to many international festivals.

Coproduced by Otter Films   in Poland

Supported in the Polish Film Institute