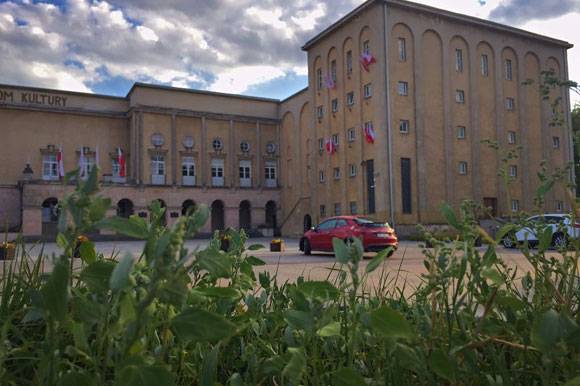 This month we speak with Jaroslaw Skulski, the programmer of Kino Fenomen in Kielce, Poland. 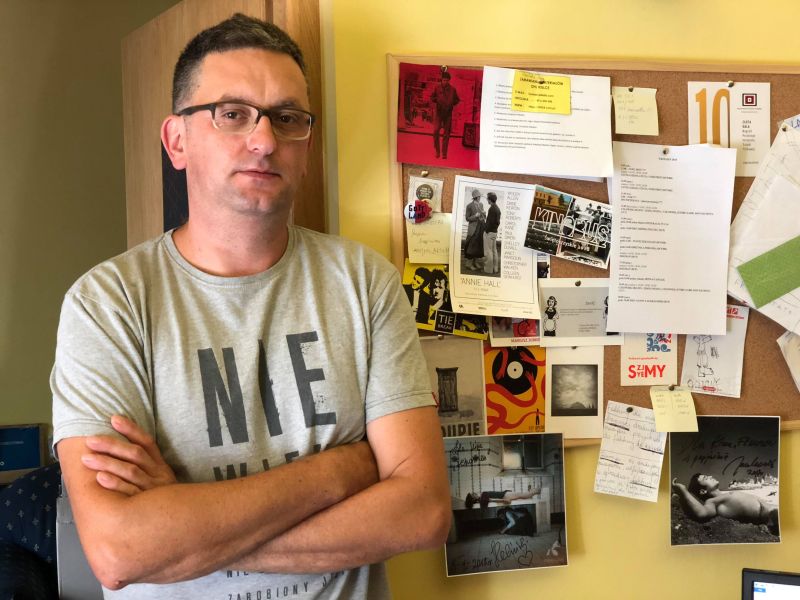 Kino Fenomen refers to the first cinema theatre in Kielce, called Phenomen, which was open in another location between 1909 and 1910. Over 100 years later, Kino Fenomen is now a favourite place for connoisseurs of ambitious and art house films, who are looking for a break from the hustle and bustle of cinema multiplexes.

Kino Fenomen is part of the Regional Culture Center in Kielce (in its old building from 1935 a cinema opened in 1937) and it is a one-screen old fashioned cinema with nearly 500 seats and a balcony. Jarosław Skulski has been responsible for its programming since the re-opening of the cinema in 2008, and in 2013 he changed the name of the cinema from Kino WD to Kino Fenomen.

Jarosław Skulski: I started working at the Regional Culture Center in Kielce in 2008, and just three months later, in December, we re-opened a cinema on these premises, after five years of being shut down due to technical problems. Historically speaking, the cinema was here from 1937, so we have a long history behind us!

The most important thing is that in 10 years Kino Fenomen has created an important cultural vibe in Kielce and in the entire Świętokrzyskie region. As a consequence, the cinema was nominated by the Polish Film Institute for the best cinema award in 2016.

And since 2017 we are the only Polish member of Europa Cinemas from the Eastern part of the country!

Jarosław Skulski: From the beginning we were an old fashioned art house cinema, without popcorn, fizzy drinks and commercial advertising before the screenings, except for non-commercial movie trailers and social campaigns' trailers.

We love good Polish and European films, and of course, art house titles from all around the world. I am not interested in screening blockbusters, because in Kielce we have three other commercial cinemas, and I never wanted to fight with them. I always wanted to be like a curator, creating and screening new things, organising special events and meetings with interesting people. That is why we are first of all trying to screen films that seem too strange or are non-profitable for other cinemas in the city.

Finally, we are a small community. When I am selling tickets before the screenings, I always try to speak with our audience in order to get to know each other, and very often people give me sweets or they ask whether it is possible to find and screen a specific film– so we try to make their wishes come true. 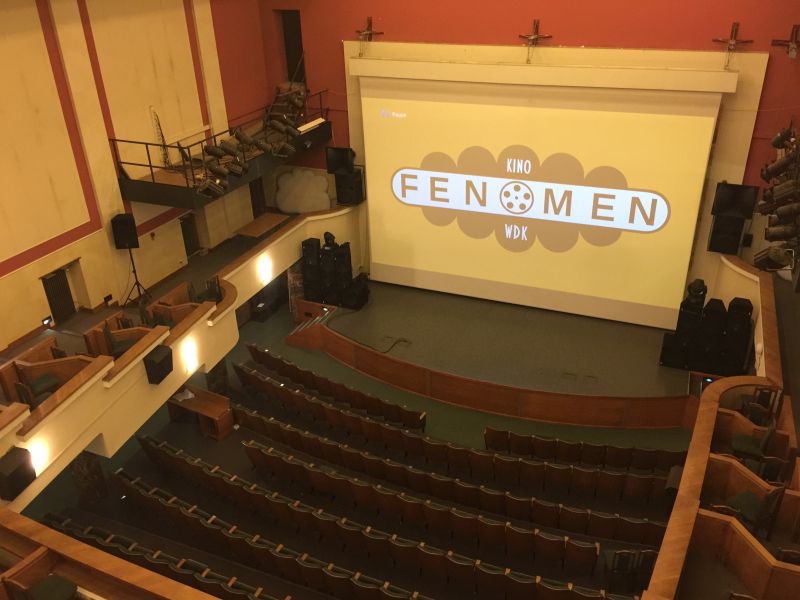 Jarosław Skulski: Kino Fenomen is not a regular, seven- days-a-week cinema, so that is why we can invite many different events and festivals including the KINOLUB Children and Youth Film Festival, which takes place every June, Akademia Filmowa 50+ (from October through May), a one year course of contemporary cinema for pensioners, as well as the Film Discussion Club from September through June.

Also in September 2017 Kino Fenomen was the host of the annual Polish art house cinemas conference and at the end of August 2018 we welcomed KINOBUS, an amazing touring film festival.

Jarosław Skulski: First of all, it is a great honour to be a part of the best European art house cinemas network, and of course, we can expect financial support every year, but on the other hand, for me it is very important to take part, as a manager, in different trainings and conferences.

Last June I was invited to the Europa Cinemas Audience Development & Innovation Lab in Bologna, which was a really amazing experience! During a few days I met over 30 people from all over Europe - cinema managers, marketing managers, programmers and so on.

Case studies, reflections, workshops – I left the Lab full of fresh ideas, for example I decided to start new projects: special screenings (with some additional activities) for disabled people, then to start creating a new visual communication design for the cinema (together with the fantastic team from the Institute of Design in Kielce), and finally, I’m thinking to start an international cooperation between Kino Fenomen and a Croatian cinema theatre. In Kielce we have a very famous handball team with lots of Croatian players, so I will ask them to become a kind of Polish-Croatian film ambassadors.

And that is why I adore Europa Cinemas!

Jarosław Skulski: Kino Fenomen addresses its activities to every type of audience, that is why we very often organise various events, such as screenings of films about food, (together with a little cooking in the cinema hall), or films about sport activities (especially running and climbing), and we also celebrate the International Dance Day, the International Vegan Day, the Valentine’s Day, Halloween, the Women’s Day and many others.

We always try to open the doors for as many partnerships as we can since our main idea is: Making the cinema a place for people and communities!

Actually, my dream is to create art house cinemas in a few small places in Świętokrzyskie, especially in small cities, where local cultural centres are still alive and where they have nice rooms with good acoustics, armchairs, even multimedia projectors and screens, but they don’t know how to make an art house cinema and to connect with the local community. 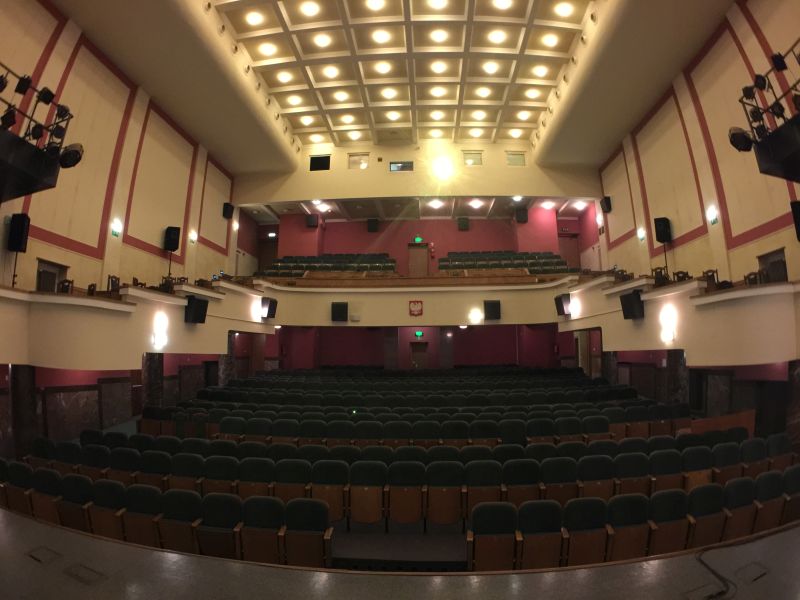 Jarosław Skulski: From the very beginning we created a few projects ranging from pre-school and school groups (Sunday animated films' screenings, together with reading books and art workshops) to our film educational project Świętokrzyska Akademia Filmowa with lectures, screenings, art workshops and discussions with young people.

In the future we want to make a special project about how to make films on mobile phones. A lot of young people want to know how to do it, so they need a little help on how to shoot photos, how to assemble the film material, how to find legal music and sounds, etc. They could eventually have a world premiere on the big screen at Kino Fenomen!

Jarosław Skulski: Since the digitalisation of the cinema in 2013, we have been organising from time to time special screenings with digital restored movies. For example we've screened The Exorcist, 2001: A Space Odyssey, A Clockwork Orange, and it was a big pleasure to watch these films in excellent quality.

On the other hand, we love to present our Polish silent films (restored by the National Film Archive) always with live music and creating a new kind of aesthetic experience.

For years now we have been organising the annual programme History in Film, with restored Polish films by Wajda, Kawalerowicz, Has, Holland, Polański and many others. For me this is a big thing because I can show people classic titles again. It is like a second life for the films.

Contact:
Kino Fenomen
Ul. Ściegiennego 2
25 - 033 Kielce
Poland
http://wdk-kielce.pl/
This email address is being protected from spambots. You need JavaScript enabled to view it.