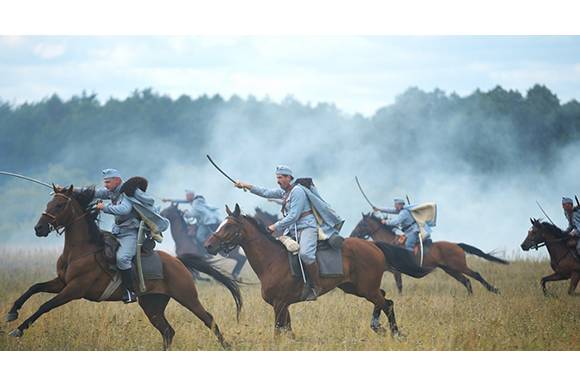 The presentation of Warsaw Works-In-Progress during Warsaw Industry Days is a continuation of the CentEast Market event, hosted by WFF in the past. The filmmakers and producers from the CentEast Europe region presented their new works on 19 October 2018.

This military drama directed by Timnur Yashchenko follows the events that took place on the Cherkasy, a Ukrainian battleship, during the Russian annexation of the Crimea, when the crew decided not give to in to hostile forces. The cast includes Dmytro Sova, Yevhen Lamach, Roman Semysal, Ruslan Koval and Oleh Shcherbyna.

„The film is a Ukrainian/Polish coproduction with a planned budget of 1.4 m USD, 42% of which was financed by the Ukrainian State Fund. We are currently in the post-production stage and the shoot took place in the spring of 2017, with 70% of the footage shot on the open sea,” producer Iryna Klymenko told FNE.

The film is a coproduction between MKK film service (Ukraine) and Intermedia (Poland). The producers are looking for coproduction support, sales agents and festivals.

Dariusz Gajewski’s costume drama will showcase a love triangle set against the background of the heroic deeds of the Polish Legions set up by Józef Piłsudski, spanning from 1914 to 1916, starting with the march from Oleandry up to the Battle of Kościuchnówka. The cast includes Jan Frycz as Józef Piłsudski, accompanied by Borys Szyc, Sebastian Fabiański, Antoni Pawlicki and Bartosz Gelner.

"Legions will be a classic war cinema presented on a major scale with the use of the most modern film techniques. We plan to showcase the most beautiful and dramatic moments of the legion story, including the famous cavalry charge during the Battle of Rokitna, which will be one of the most spectacular sequences of the film," producer Maciej Pawlicki told FNE.

The shoot for Legions took place in the autumn of 2017. The film is produced by Pawlicki and his company Picaresque (Poland) in coproduction with FINA (Poland), with a budget of 6.5 m EUR / 28 m PLN. The film has received financial support from the Polish Ministry of Culture and National Heritage (Poland). The premiere is planned for September 2019.

I Am Lying Now (Poland, Netherlands)

The futuristic noir film directed by Pawel Borowski follows the lives of three people who are being manipulated. Their world of stardom and celebrity is not what it seems. The cast of popular Polish actors includes Maja Ostaszewska, Agata Buzek, Joanna Kulig, and Robert Wieckiewicz.

"I've created a fictitious world and wanted to work with a genre of film noir mixed in with elements of a thriller. What we created is a sort of an entertaining fairytale for adults that has a second message underneath it, exploring the very essence of what it means to live a true life." director Pawel Borowski told FNE.

The production of the film began 10 years ago with a long development period and the shoot wrapping in 2016. The film is a Polish/Dutch coproduction between Opus Film (Poland) and New Amsterdam Film Company (Netherlands), with a planned budget of 1.4 m EUR, with the financial support from the Polish Film Institute, the Lodz Film Fund and the Silesia Film Fund. The sales agent for this project is Global Screen. The premiere is planned for 2019.

The feature debut drama of Monika Jordan-Modziankowska is a love-triangle set in the Silesian mining community. Foreman Kacper sends his friend Oskar into the deepest parts of the mine, so he can have an affair with Oskar’s wife Magda. When a powerful explosion traps Oskar underground, the unfaithful couple need to face the consequences of their affair. The cast of popular Polish actors includes Julia Kijowska, Bartosz Topa, Lukasz Simlat and Andrzej Konopka.

„My film is a study of betrayal, inspired by the real rescue missions in a Polish mine and the one that recently took place in Chile. My characters are normal people who act in a way that most people who cheat act, but the dramatic circumstances accelerate the situation,” director Monika Jordan-Modziankowska told FNE.

The film was shot in July 2018, produced by Anna Wereda and her company Autograf (Poland), with a budget of 3 m PLN with the financial support from the Polish Film Institute, TVP and FINA. The producers are looking for sales agents, distributors and festivals.

The documentary debut from accomplished DOP Max Golomidov explores the Tokyo city park Yoyogi, with all its wonderful landscapes and eccentric visitors.

"We are in the early stages of development, gathering footage and materials of different people visiting the park. The film is inspired by the haiku form, which we will included in the production both in the Japanese and Estonian language. We are hoping to create a fresh perspective on the Eastern way of living, challenging the modern digital world and celebrating contemplation offline," producer Volia Chajskousaya told FNE.

The film is produced by Volia Films (Estonia, Belarus) and Allfilm (Estonia) in coproduction with Japanese company Kofuba. The project received development funding from the Estonian Film Institute. The producers are looking for coproducers, distributors and festivals.

Alexander Rastorguev, an accomplished documentary filmmaker, died alongside two other members of his documentary film team, killed in the Central African Republic, where he was researching his new documentary about Russian mercenaries. The director's cooperators are working on a documentary project about his life and work, comprised of his own footage, works and artifacts.

„This will be a two-part documentary about Alexander's life. The first will be a festival documentary and the other a web doc. He was passionate about new technologies and coming up with new ways of narrating a film, and we would like our documentary to reflect that,” producer Masha Gavrilova told FNE.

The film is produced by Tvindie Film Production (Russia), the premiere is planned for 2020 and the producers are looking for coproduction support.