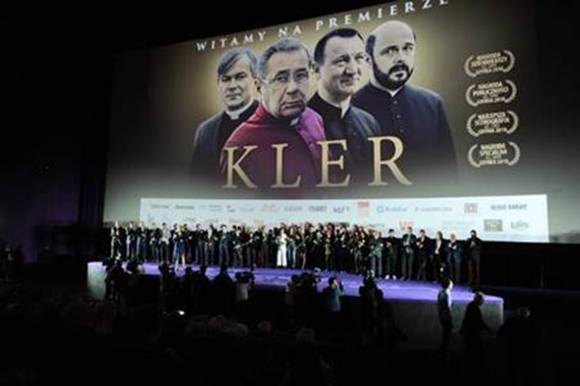 Premiere of The Clergy by Wojciech Smarzowski photo: Kino Swiat

WARSAW: Polish films have racked up a record 15 m admissions in 2018, breaking all previous annual records, with two months still to go.

The results surpassed the 13.5 m admissions for Polish films in 2017, out of a total number of 56 m admissions for all films in 2017. The year 2018 also marks another important attendance result for Polish cinema. On the weekend of 20-21 October, Wojciech Smarzowski's The Clergy (Profil Film Jacek Rzehak) had over 4 m admissions, which hadn't happened in 17 years, when Quo Vadis directed by Jerzy Kawalerowicz had similar results in 2001.

At this rate, The Clergy appears likely to surpass Quo Vadis and reach at least the 3rd place for overall attendance. The film has also noted strong results abroad and has been sold to the UK, Ireland, the USA, Canada, Germany, Austria, Holland and Norway. The film opened in Polish cinemas on 28 September 2018 distributed by Kino Świat. It had 935,000 admissions during its opening weekend noting the best release of a Polish film in the last 30 years.