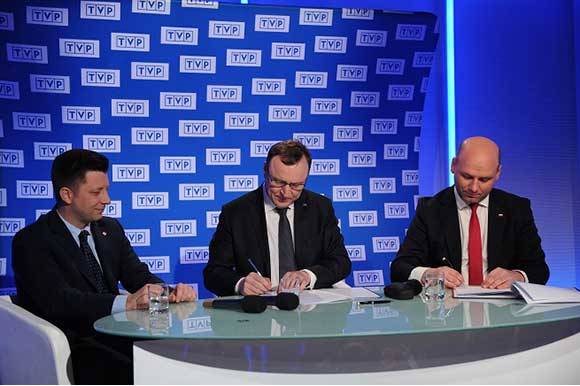 WARSAW: Polish public broadcaster TVP will launch a TVP Vilnius channel in Lithuania in May 2019.

TVP Vilnius will broadcast in Polish. Its offer will include a daily information programme and current affairs programmes prepared by journalists from Polish media in Lithuania. After a five-year break, the Polish Television also restored regular correspondents in Vilnius.

The task of TVP Vilnius will also be to promote Polish language, Polish tradition and a positive image of Poland abroad. Work on the new channel started in 2018. TVP is currently building a studio and an editorial training programme in Vilnius for journalists, operators, editors and collaborators living in Lithuania.

The agreement on the creation, co-financing and distribution of TVP Vilnius was signed at the headquarters of TVP in Warsaw by the head of the public broadcaster Jacek Kurski and deputy Minister of Foreign Affairs Szymon Sękowski.

“The TVP Polonia channel … has been in existence for 25 years. However, this is not enough for our compatriots living in Lithuania. This is not a Polish minority; they are Poles who have always lived in this area, and found themselves in territories or within other countries because boundaries have shifted,” Kurski said in an official statement.