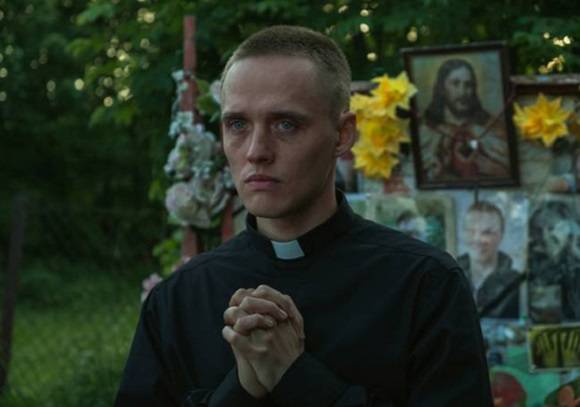 Weronika Czołnowska, Head of Industry at New Horizons IFF told FNE “ When it comes to the Completed Films section, our intention is to  showcase films that were presented at Polish Days in the earlier stages of production; most often they are films from directors that presented their works at our festival in the past. We are also keen on promoting debutants and that is why this year we chose debut films Marygoround and Taste Of Pho. Xawery Żuławski is a veteran of our festival, while Jan Komasa  and Marek Lechki presented their projects during past editions of Polish Days.”

“It is very important for us to give the directors long-term promotion, so we try and track the development of these projects and give them our support on every stage. It is worth mentioning that the second film by Marek Lechki was also developed at the New Horizons Studio+; these projects often find their way into Polish Days and then to a premiere at our festival.” she adds.

The titular “bird talk”, based on a scrip by Andrzej Żuławski and directed by his son Xawery Żuławski, who is paying homage to his father’s cinema, is the language used by those excluded from the aggressive, raucous majority – a history teacher tormented by his students, a recently-fired language teacher, a leprous composer, a woman who cleans the house of a banker, a deformed florist and a student fascinated by the cinema. They are pushed to the margins by a system that reproduces thoughtlessness and chants of hatred. The film’s protagonists have only irony, flowers and quotes from the classics as their weapons.

“The key principle here is creative freedom: the film is a celebration of Andrzej Żuławski’s approach to art, his reliance on impulse and intuition, and his ability to make use of things that seem to ‘come out of nowhere’. This creative freedom means, that filming Bird Talk – a polyphonic text, dealing with the multifaceted reality of present-day Poland – was an adventure, not a fraught and doomed attempt to imitate Andrzej Żuławski. And there’s no point “rationalising” him by resorting to safe clichés, despite the fear and uncertainty that arise with each step into the unknown”, said Xawery Żuławski.

Marcin Wierzchosławski is producing trough Metro Films (metrofilms.com.pl) in coproduction with Orka Studio and MX35. The budget is 750,000 EUR and the film received support from the Polish Film Institute.

The film was shot in 2019, the premiere is planned for 27 September 2019 and the distributor is Velvet Spoon.

Production information:
Metro Films
www.metrofilms.com.pl
This email address is being protected from spambots. You need JavaScript enabled to view it.

A Warsaw-based Vietnamese cook struggles to fit into the European culture, which his ten-year-old daughter has already embraced as her own. A story about love, misunderstanding and food.

“I wanted to tell a story of a father - daughter relationship. I wanted the film to be about how father’s love for his daughter could protect his heart and their home from difficulty, while living in today’s capitalist world. I wanted the father to be a cook, because a restaurant is a place that has a lot to do with globalisation and cultural integrity in a direct sense. But in this film cooking is also a means to show love, to feed, to protect and to give comfort”, said the director Mariko Bobrik.

The film is a Danish / Polish coproproduction, produced by Benny Dreschsel of Rohfilm Productions and Marisz Włodarski from Lava Films. The budget is 1 m EUR and the film received support from EC1 Lodz.

The premiere date has not yet been announced, world sales are managed by New Europe Film Sales.

Production information:
Lava Films
www.lavafilms.pl
This email address is being protected from spambots. You need JavaScript enabled to view it.

A story of a 20-year-old Daniel who experiences a spiritual transformation while living in a Youth Detention Centre. He wants to become a priest, but this is impossible because of his criminal record. When he is sent to work at a carpenter’s workshop in a small town, on arrival he dresses up as a priest and by chance takes over the local parish. The arrival of the young, charismatic preacher is an opportunity for the local community to begin the healing process after a tragedy which took place there some time ago.

“Corpus Christi is about the mystery of spiritual experiences, both in the sacred and the profane, partially drawing on a true story, at times difficult to believe. Although the main character feels a calling in the face of limitations imposed by formal structures he finds it impossible to make any use of it. It is a tragic conflict of a reclusive and troubled community hiding a dark secret”. said the director Jan Komasa.

Corpus Christi is based on a Script Pro winning project written by Mateusz Pacewicz. The film is produced by Leszek Bodzak and Aneta Hickinbotham trough Aurum Film with a budget of 1,223,776 EUR.

The film was shot in 2018, the premiere is planned for 11 October 2019 and the distributor is Kino Świat. The world sales ae managed by New Europe Film Sales.

Production information:
Aurum Film
www.aurumfilm.pl
This email address is being protected from spambots. You need JavaScript enabled to view it.

During a few days in May. Maciek (35) realizes his life is pointless. Every day, he works from dawn to dusk only to pay the mortgage on his apartment. As his boss treats him dishonestly, Maciek feels he’s had enough. He steals his boss’s car and spontaneously goes on a desperate joyride. He drives across Poland, where people are preparing for a celebration of an unspecified anniversary.

In the meantime, Magda (35), a Town Hall employee, handles the organisation of the anniversary events. Highly committed at first, she gradually notices all the dirt and fiction around her. At some point, she must take a crucial decision whether she should accept it or risk her career and leave. Finally, on the celebration day, both protagonists meet for a moment. Can their meeting change anything?

“ ‘This world is a fiction’ according to the graffiti that appears on the wall in the city portrayed in Interior. The main character of our film experience this fiction on many levels. Life in a world burdened with self-interest forces the characters to face a dilemma: face the fiction or fight it?”, said director Marek Lechnki.

Anna Kępińska and Maciej Kubicki are producing trough Telemark in coproduction with Silesia Film, Dolnośląskie Centrum Filmowe, Heliograf, Monternia, The Out of Frame and Kineskop . The budget is 850,000 EUR. The film received production financing from the Polish Film Institute.

The premiere date has not yet been announced and the world sales are open.

Production information:
TELEMARK
www.telemark.com.pl
This email address is being protected from spambots. You need JavaScript enabled to view it.

Mary is a lonely, small-town grocery store worker, living a life free from sin. Struggling with menopause, she visits her doctor, who prescribes a course of hormone replacement therapy. On the eve of her 50th birthday, Mary’s life begins to take a totally unexpected turn: it turns freaking magical. As she starts to feel things differently, she begins to live more extravagantly.

Additionally, her young, vivacious niece keeps showing up at her doorstep and affects Mary’s sexual awakening. But there’s something much darker bubbling beneath the surface... Meanwhile, a holy presence in Mary’s home appears to silently judge her, which deepens the hero’s uncertainty. This religious anxiety threatens to suppress her newfound lust for life. Mary must act if she is to keep the wickedness at bay.

“It was fascinating to find that for my mother and my female friends alike, life started at the age of 50. Grażyna, who plays the protagonist in this film, played various roles throughout her life – she was a daughter, a mother, and an actress before she simply started being herself. She was disappointed to realise that she had always put everyone else’s needs before hers. This is also the point at which we meet Mary, the main character. She begins to experience the world like never before, finally freeing her libido and her feminine strength”, said the director Daria Woszek.

Janusz Bielecki is producing trough All Muses in coproduction with Solopan. The budget is 960,000  EUR and the film received production support from the Polish Film Institute (pisf.pl). The premiere date has not yet been announced and the world sales are open.

Production information:
Daria Woszek
This email address is being protected from spambots. You need JavaScript enabled to view it.