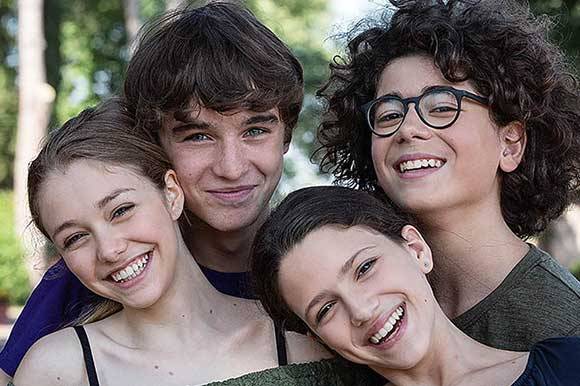 WARSAW: Luca Milano, the Executive Director of Italian channel for children Rai Ragazzi, spoke to FNE exclusively about the new season of Jams, a locally produced drama series created to educate children on how to deal with sexual harassment. The first season of the series was showcased at the Inspiration Day, sponsored by Film New Europe and the Central European Initiative (CEI) on 25 September 2019 and hosted by Warsaw Kids Film Forum.

Jams is an Italian television live-action TV series for teenagers produced by Stand by me for Rai television. Four boys, Joy, Alice, Max and Stefano decide to participate together in a cooking competition organised by their school under the name Jams, the acronym of their names. Suddenly, however, Joy starts to distance herself away from everyone and behave badly, apparently without reason. Her friends will find out that the girl has been molested by a family friend and they will do anything to help her. The series is produced by Simona Ercolani and her company Stand by Me.

FNE: You chose to invest in a series that is challenging, how did it perform on your channel?

Luca Milano: It did very well, it kept the same level as shows that are purely entertainment and it also generated a lot of interaction. The real result is what we can't measure, which is the praise and the reaction of viewers. We decided to commission the second season because the actors who were cast as the group of friends played very well together and our audience wanted to watch what the development of their lives would be. Of course, we cannot deal with sexual harassment; in the next season we are dealing with another of the main characters suffering from cyber bullies, so it is a series which tackles the daily life of children and their problems.

Luca Milano: Yes it is risky, but if we want to produce something valuable we have to take a few risks. We can't just buy what comes from the international market or produce something that we already have, it is not interesting. We have to look for something different and we think that being contemporary, presenting the reality of children's lives, not only fairy tales, and presenting the issues that kids meet in their real life, is the key for public television to be near them.

FNE: Did you sell the format to international broadcasters?

Luca Milano: The show was launched just before the summer, so we are currently dubbing it in English. We will present it at upcoming festivals, it will be in competition at the Orlando Festival in USA in October 2019, so we will see where it goes from there.

FNE: Are you looking at any international projects?

Other than that I think a show about any big issue in the lives of grownups and kids is important in Italy, as it is in Poland or the US. So you have to look for something relevant. In this case the geolocalisation is less important than the topic.