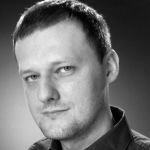 And he has a law degree. A formidable force within one of Poland's most significant distribution companies.

Since entering the market in 1994, Gutek Film has released over 200 titles, establishing a solid viewer base eager for artistic and intellectual movies from the great masters of contemporary cinema as well as new, experimental pictures of the film advantage. Dusinski joined the company in 1998.

In 2007 Gutek Film distributed 20 titles. "Unquestionably, our greatest success was achieved by the movies Parfume, Into Great Silence and I Served the King of England," Duszynski says. In 2008 the company introduced nine new titles to the Polish cinemas, and the upcoming release schedule contains three Polish movies: Four nights with Anna directed by Jerzy Skolimowski, Homeless Playground from Kasia Adamik, and 0_1_0 by Piotr Lazarkiewicz. "A part of our future strategy includes distributing more quality Polish productions," he notes.

The recent distribution deals made by the company point to a continuous strong connection with the European cinema. Gutek Film will once again present new movies from favored directors, such as Ricky directed by Francois Ozon, Antychryst from Lars von Trier, Brideshead Revisited directed by Julian Jarrold, and Let it rain from Agnes Jaoui. "What sets us apart from the other Polish distributors is our focus on artistic cinema as well as particular directors like Almodovar, von Trier, Lynch, Jarmush, Wenders, Kar Wai, Ozon etc. We do not offer genres like horror movies or thrillers. Our specialty is the distribution of titles awarded during major international film festivals," says Duszyński.

Along with supporting local production, Gutek Film is engaging in further development. Up next: "We want to enter the digital market and introduce our movies to the VoD chain and in the internet."