The idea for The Mill And The Cross came from a book devoted to one of Bruegel's paintings Christ Carrying A Cross, written by Herald Tribune art critic Michael Gibson. The art connoisseur was familiar with Majewski's experimental yet picturesque style and approached the Polish filmmaker with the idea to jointly create a script inspired by Bruegel's masterpiece.

Out of over 500 characters presented in the original painting, Majewski chose a dozen whose stories interweave in the movie's plot. The action of the film takes place in 1564, the year Bruegel created the painting, and it joins the theme of Christ's suffering with the political and religious oppression of Flanders at the time.

Location filming started in October in Silesia. On November 21, the international cast, who had just arrived, was introduced. They include Rutger 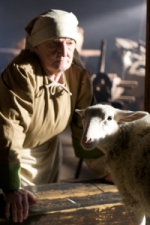 Hauer who will play Pieter Bruegel, Michael York starring as an art collecting banker, and Charlotte Rampling, who recently joined the cast to play Mary the Mother of Jesus Christ. In a short scene selection from the film, Lech Majewski once again steps out of his comfort zone, using multilevel film shoots, new computer techniques, and 3D effects.

The movie's main producer is Angelus Silesius Society, a company co-funded by the director and involved in his previous projects. The main funding comes from Polish TV (www.tvp.pl) and the Polish Film Institute (www.pisf.pl) . The movie's total budget is PLN 4.2 million (1.1 million euros) with 390,000 euros of production support from PISF. The other companies participating in this project are Film Institution "Silesia Film", Arkana Studio, Supra Film, Odeon, 24 Media, Swedish company Bokomotiv, and Piramida.

The shoot is planned to wrap by the end of December 2008 and postproduction will last till August 2009.