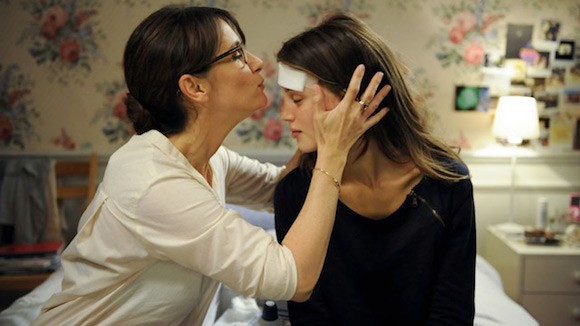 CANNES: Director François Ozon’s newest film, Young and Beautiful, introduces the public to 23 year old French actress Marine Vacth in a starring role that already has some critics comparing her to a young Catherine Deneuve.

Written and directed by Ozon this is one of his most sophisticated and mature films to date.   The story is a portrait of the coming of age of a 17 year old girl, Isabelle, over four seasons during the period of a year.   The film will undoubtedly serve as a launch-pad for Vacth in the role of Isabelle who is indeed not only young and beautiful but also exceedingly talented.

The story follows Isabelle who comes from a happy and stable middle class Parisienne home through four seasons of her sexual coming of age. Isabelle’s sexual activity starts in summer with the willing loss of her virginity to a handsome German tourist on the beach during a family holiday. The opening scene sets the tone for Ozon’s film as we become voyeurs together with her younger brother Victor played by Fantin Ravat who is watching her sunbathe topless on the beach through binoculars.   Isabelle is cool and confident about her sexuality and experiments without any seeming moral encumbrances.

We next see her in autumn where she has inexplicably turned to a secret life as an after school prostitute although she does not need the money and presumably wants for nothing. These scenes are interestingly intercut with students from her class at the Sorbonne reading from Rimbaud’s poem No One’s Serious at Seventeen.

The winter episode presents the family fall-out when her clandestine activities are discovered after one of her clients dies of a heart attack after a sexual encounter with her and the police are called in.   Her liberal and seemingly loving and supportive parents, her mother Sylvie played by Geraldine Pailhas and her stepfather Patrick played by Frederic Pierrot, cannot make sense of why Isabelle has opted for such a choice. To his credit Ozon does not answer this question for the audience either and indeed it is doubtful that Isabelle herself understands why she chose this kind of sexual experimentation or what the thrill of it is.

In spring we see Isabelle involved in a more normal teen romance but clearly not fully involved and still recovering from the impact of her earlier experiences. Each of the four seasons is accompanied by a song by Francoise Hardy one of the most popular singers of French romantic pop songs in the 1970s.

The ambiguity of Ozon’s take on Isabelle’s sexual development is one of the most interesting things about the film. He does not offer us any answers as to why she took this seemingly inexplicable direction. Beauty is seen as valuable for itself and at the same time a commodity that should be used, bought and sold and that Isabelle is aware of this.

One of the only clues is a final scene with Charlotte Rampling, another beautiful woman, now much older, who is pondering her life and what choices she made.

The film is full of scenes that are both beautiful and disturbing and has been shot in a straightforward way with no flowery tricks by cinematographer Pascal Marti. But the vision that will undoubtedly stay in the viewers’ minds is that of Vacth who this film is likely to make into an international star.