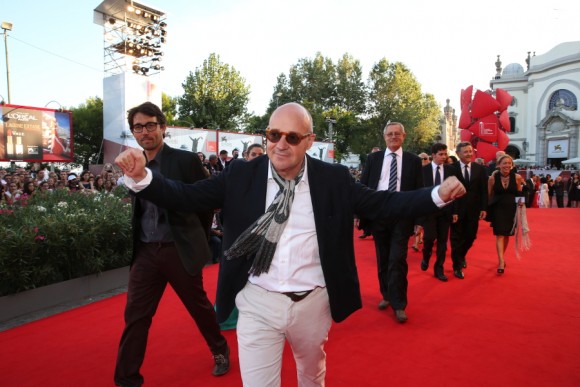 VENICE: A jury headed by Bernardo Bertolucci awarded the Golden Lion for Best Film at the 70 Venice Film Festival to the Italian documentary Sacro Gra directed by Gianfranco Rosi.   Rosi spent two years in a minivan filming on and around the GRA, Rome’s giant ring road, and the result is an extraordinary contemporary portrait of Roman life and its fringes.

While the festival attracted its usual quota of international stars like George Clooney and Nicholas Cage it was undoubtedly the surprise appearance of former Polish president and Solidarity leader Lech Walesa that stole the show this year.  Walesa turned up for the world premier of the biopic Walesa, Man of Hope, directed by Polish director Andrzej Wajda who was also honoured with a Lifetime Achievement award by the festival.  Displaying his legendary charisma, Walesa charmed the media and the crowds.  The film charts how he rose from a simple blue-collar worker to become a national hero and international statesman.  Walesa said that it might be time for him to start another revolution.

Bulgarian director Milko Lazarov for Alienation was awarded the best director of a debut by the FEDEORA critics association as well a scoring a special mention from the Europa Cinemas Label.  FEDEORA critics also awarded Slovenian director Rok Bicek’s Class Enemy as Best Film in the of the Venice International Film Critics Week

MARCELLO MASTROIANNI AWARD
for Best Young Actor or Actress to:
Tye Sheridan
in the film JOE by David Gordon Green (US)

AWARD FOR BEST SCREENPLAY to:
Steve Coogan and Jeff Pope
for the film PHILOMENA by Stephen Frears (United Kingdom)

Collateral Awards of the Festival

Open Award
to Serena Nono, for the movie Venezia salva