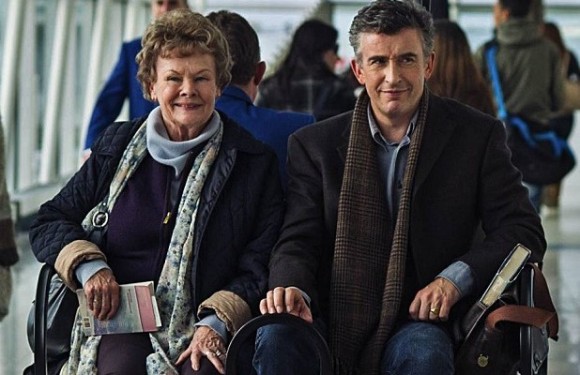 VENICE: Few directors can match Stephen Frears when it comes to getting just the right mixture of laughter and tears from audience and still end up with a thought provoking and intelligent film.

Philomena is based on the true life story of Philomena Lee who as an unwed teenage mother in the early 1950s had her child taken away from her when she was sent to a convent in Ireland.

The practice was far from unusual in Ireland and a number of other countries at that time as unwed mothers were considered “fallen women” who were cast out by family and society and were considered morally lax and not fit to be mothers.   Philomena ends up doing hard labour in the convent laundries to pay for his sins. When Philomena’s baby was a toddler the convent “sold” her son and he was set to America where he was adopted by rich parents.

The young Philomena is played by Sophie Kennedy Clark and the scenes of early 1950s Ireland are beautifully shot. The young Philomena is totally naïve and becomes pregnant when she meets a young man at a fair without even really understanding what she is getting into. The conditions under which she gives birth are truly horrific and the nuns inform her that she should expect to suffer.

Philomena spent decades searching for her lost son managing to catch the attention of jaded ex-BBC journalist Martin Sixsmith who wrote a book about her search and the in justice that was done to so many young mothers in those less tolerant times. Although before becoming too smug we might ponder the fact that in many cultures and parts of the world today an unwed mother can be killed for her “crime.”

Steve Coogan who plays Sixsmith wrote the script together with Jeff Pope based on Sixsmith’s book about Philomena’s search for her lost son. Frears manages to fill what could be a grim story with irony and humour and at the same time turns it into a social criticism of the times.

But it is Judy Dench who is the star of the film giving an extraordinary performance as the somewhat naïve Philomena who even after all she has been through manages to maintain a positive outlook on life. While Sixsmith is cynical and critical of everything around him. Frears turns the interplay between the two characters into one of his best films in recent years.

These two actors are the heart and soul of the film and the witty dialogue of the weary Sixsmith played off the warm and still kind Philomena is what this film is all about. Two master actors showing off at their craft. Despite all that has happened to her Philomena is still a Catholic and still loves romances and sentimental stories. In the hands of a lessor actress this could have been a disaster but Dench plays her with dignity and humour never getting a scene wrong as she and Coogan journey to Washington D C to try to find her son. In the end they end up back where they started without any answers about the questions of sexual pleasure, morality and the British middle class but it is worth the journey.