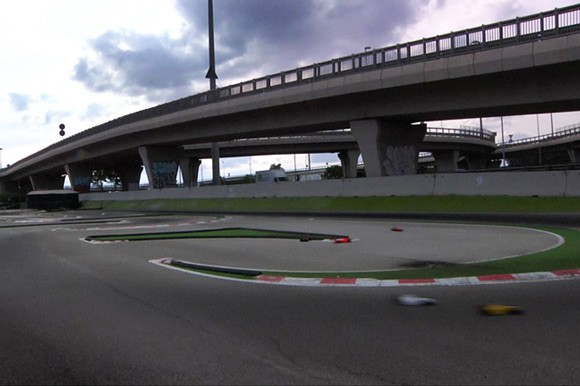 VENICE: Documentaries have been turning up and winning prizes at major film festivals in Berlin and Cannes in increasing numbers in recent years and Gianfranco Rosi’s stunning Sacro Gra is certainly a worthy addition to the trend.

Rosi is already known internationally for his documentaries about the Varanasi boatmen in India, the dropouts in the American desert and the drugtrade killers in Mexico.   But he returns to his own country of Italy for what is possible his best film so far.

Rosi spent two years in a minivan roaming Rome’s ring road known as the Grande Raccordo Anulare or GRA. In this area of constant turmoil he set out to discover hidden worlds and strange characters that make appearances against the background of the GRA. The documentary looks at the disparate characters that live and work around the edges of the GRA.

Rosi has said he was inspired by Italo Calvino’s invisible Cities where Marco Polo describes his travels to Kublai Khan. Rosi’s film like the book leaves it to the audience to decide what it is all about. Rosi shows people living on the fringes of society but he does not try to analyse or judge them or why they are there. Rosi says that the book and presumably the film are about the desires and confusion that is generated by city life and how these eventually become part of the people that live there.

Rosi films a strange collection of eccentrics that inhabit the areas on the fringes of the road. He manages to capture them and integrate them into his collage that in the end builds up an intriguing portrait of contemporary Roman life that goes back to the great Italian filmmakers like Fellini.

We see an aristocrat who lives in a tiny one room apartment with his colleague age daughter. There is a price who does gymnastics on the roof of his castle that is surrounded by modern buildings. Other characters come and go or are glimpsed through their windows. What is clear is that the middle class does not live next to the motorway. These are people dwarfed by the giant road they have no choice but to live beside.

Some reoccurring characters tie the film together like the ambulance paramedic Roberto who continually circles the GRA picking up victims of accidents. Roberto is one of the few on the GRA who emerges as a character in his own right. We also see him at home off-duty speaking kindly to his aged mother. There is also the intriguing tree doctor Francesco who records the sounds of the red palm weevil that is destroying palm trees along the GRA. The doctor says that the trees are being eaten by hundreds of insects that are sucking them dry and that the palm trees cannot defend themselves against these disgusting attackers. This is as close to a statement about modern city life along the GRA as Rosi comes. The meaning of the film has to come from the collage of images and people that builds into a single impression.