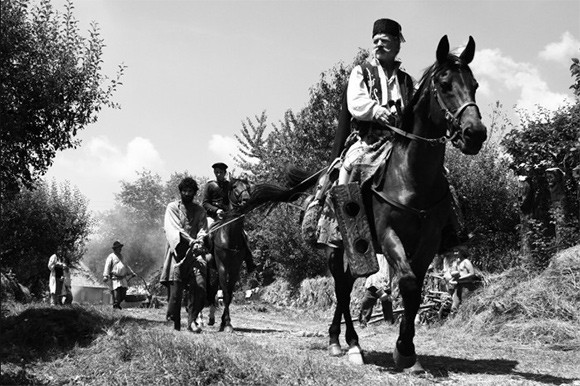 BERLIN: Romanian director Radu Jude has come up with what could almost be called a new genre in his highly stylish Berlinale competition entry Aferim! The film uses what looks deceptively like a classic 1940s or 1950s old black and white style of filmmaking to deliver a cutting edge modern philosophical message.

Jude is not tempted to mock or parody is chosen genre which would have been all too easy a temptation but stays true to his classic cinematic style and road movie story telling while infusing it subtly with new meaning. This is a new use of cinematic language.

Set in Wallachia in 1835 in what would today be modern day Romania two horseback riders, the gendarme Costandin played by Teodor Corban and his teenage son Ionita played by Mihai Comanoiu cross the barren plains and mountains of the region that remind the viewers of the American West.

The two are searching for a gypsy slave, Carfin played by Cuzin Toma who has run away from his master and is suspected of having an affair with his master’s wife. The two are also on a training mission as Constandin wants his son to take over his job as a constable and seeks to set what he thinks of as a good example for his young son.

Costandin has a fatalistic aphorism for every situation that explains the meaning of his world and of life. Contained within this mindless folk wisdom that shows the engrained bigotry and lack of individual questioning of what is right and wrong is the roots of today’s mindless repetition of the broad generalizations of the media, corporate advertising and government propaganda.

Constandin and Ionita encounter people of different nationalities and beliefs including Turks, Russians, Christians, Jews, Romanians Gypsies and Hungarians on their journey.

Prejudices have been passed down unquestioningly from generation to generation. Gypsies are slaves that can be bought and sold in 1835 in Wallachia and their masters have the right to punish or kill them as they believe necessary.

When Constandin and his son encounter groups of gypsies they take it as a matter of course to treat them cruelly even though Constandin is not at heart a particularly cruel man. He is simply a product of his times and his beliefs.

When the slave Carfin is finally tracked down and captured he is trussed up like an animal and slung over Constandin’s saddle for the journey home. The father and son also capture a small Gypsy boy who is also a runaway.

Despite behaving with the brutality of a man of his epoch and a constant string of prejudices that he pours out Jude succeeds in making Constandin a not unsympathetic character. He enormously human and even develops a certain sympathy for his captive Carfin that he carries on a dialogue with while slung over his saddle with his feet in stocks. He unsuccessfully tries to soften Carfin’s punishment at the hands of his master and is deeply moved when he finds he cannot change the Gypsy’s cruel fate.

Jude carefully researched his time period and much of the dialogue was taken directly from documents of the time. What looks and sounds almost surrealistic is in fact much more real than most fictionalized accounts in historical films.

Jude makes his points with infinite subtly never driving home his point but leaving it for the audience to consider what this parable has to tell them.