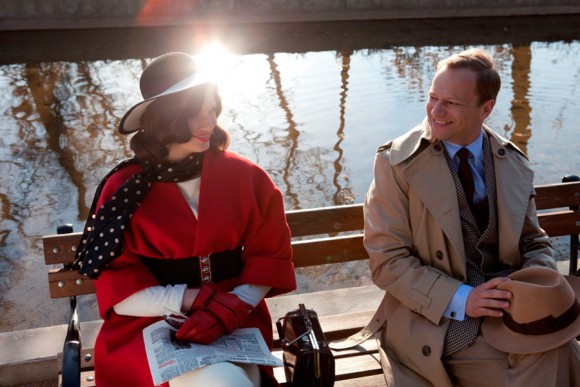 The Eccentrics. On The Sunny Side of the Street by Janusz Majewski

MOSCOW: The 38th edition of the Moscow International Film Festival will go on from 23-30 June presenting a vast selection of programmes and films despite running two days less than usual again this year due to budget cuts.

Three films from CEE will compete in the main international competition line-up of 14 films for the Golden St George, the festival’s main prize. Veteran Polish director Janusz Majewski’s The Eccentrics. On The Sunny Side of the Street will screen in competition as well as the Serbian/Croatian coproduction the comedy Train Driver’s Diary directed by Milos Radovic. Bulgarian director Radoslav Spassov has also made the line-up with his The Singing Shoes.

And proving that the festival’s credentials on the political correctness front the Ukrainian film The Nest of the Turtledove directed by Taras Tkachenko has also scored a slot in the main competition. Russia is represented with The Monk and the Demon directed by Nikolai Dostal.

The jury of the main competition will be headed by Bulgarian actor and director Ivaylo Hristov, who received the Grand Prix at last year's Moscow Film Festival for his film Losers produced by Sofia based Profilm. The jury also features German director Ulrike Ottinger, Indian actor and producer Randhir Kapoor and Russian actress Viktoriya Isakova.

Side bars include a Focus on Dutch and Korean cinema, as well as a section Cinema of the Turbulent Arab East in the Discovery section. With 2016 declared the year of Russian Cinema a programme of Russian films that have become both Russian and international icons promises to present both the familiar and seldom seen classics.

Excentrycy, Czyli po Slonecznej Stronie Ulicy/ The Eccentrics. On The Sunny Side of the Street (Poland)
Directed by Janusz Majewski
Produced by WFDiF
Coproduced by Agora
Supported by Polish Film Institute