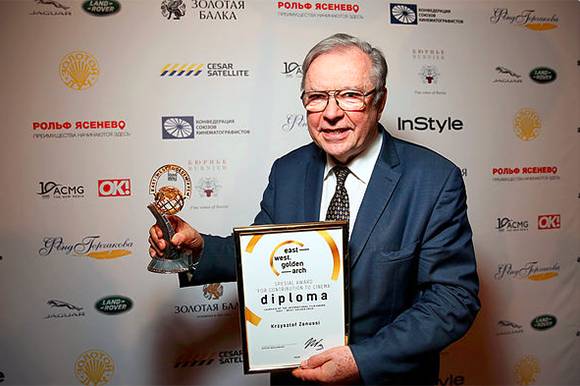 MOSCOW: The Oscar nominated Loveless directed by Andrei Zvyagintsev won awards for Best Film, Best Director, Best Music and Best Cinematography at the first ever edition of the East West Golden Arch awards, a new prize for films from the 32 countries of Eastern Europe and Western Asia.

The awards ceremony took place at the Galina Vishnevskaya Opera Centre in Moscow on 14 April and was a star studded event that included global opera star Dinara Alieva, producer Alexander Rodnyansky, many of Russia’s top actors including Ingeborga Dapkunaite, the leading actors Alexandra Borbély and Géza Morcsányi from the much awarded Hungarian film On Body and Soul directed by Ildiko Enyedi, and other glitterati from across the region.

Renowned Polish director and cultural figure Krzysztof Zanussi told FNE he had finished editing his latest film Ether produced by Tor Film Studios (Poland) and coproduced by Interfilm Production Studio (Ukraine), Studio Uljana Kim (Lithuania) and Lakoon Film (Hungary), the day before the awards. He was on hand to collect the lifetime achievement award for cinema.

The jury was made up of 24 leading experts on cinema in Asia and Eastern Europe including Film New Europe’s Editor-in-chief Anna Franklin, who was one of the original St Petersburg FIPRESCI group attending the seminar that resulted in the establishing of the new award.

Earlier in the day Russian critic and award founder Andrei Plakhov hosted a seminar on film from the region. Film New Europe chief editor Anna Franklin was one of the speakers presenting the Film New Europe Association members and the FNE Daily newswire and the role this plays in promoting film across the region and building cultural bridges with neighbouring countries.

The award was founded following a seminar organised by Andrei Plakhov and Konstantin Shavlovsky under the auspicies of the Cinematographers Unions Confederation.

Best Supporting Actor:
Alexey Serebryakov for his role in How Viktor “the Garlic” Took Alexey “the Stud” to the Nursing Home (Russia)
Directed by Aleksandr Khant