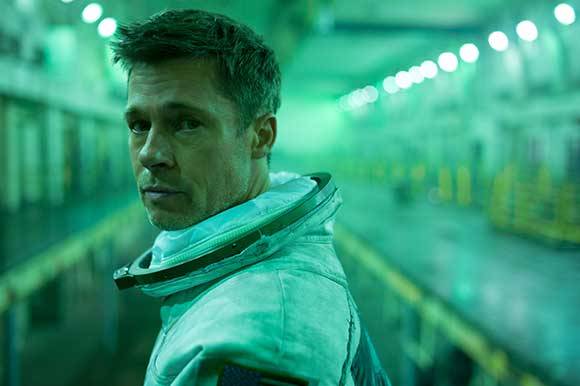 VENICE: American indie filmmaker James Gray is not the first name that springs to mind when you think of a Hollywood sci-fi blockbuster, but Ad Astra, which boasts Hollywood mega-star Brad Pitt in the leading role, is an accomplished film with enough artistic backbone to score a slot in the main competition in Venice.

The main character is an astronaut and space-cowboy Roy McBride played by Brad Pitt, who travels to the outer edges of the solar system to find his missing father, a maverick astronaut and scientist Clifford McBride played by Tommy Lee Jones. Roy has been sent into space to unravel a mystery that threatens the survival of planet Earth but he increasingly realises that the real mystery is what has happened to his father, that he assumed was dead. Roy has grown up idolising his father as a hero but he now must confront the possibility that his father is not only alive but has perhaps become an evil madman, who is threatening the existence of the solar system.

Gray pays homage to a long line of sci-fi films and in a statement says “Arthur C Clarke, who wrote 2001: A Space Odyssey: ‘Either we’re not alone in the universe, or we are, and both are equally terrifying.’ And I thought, well, I’ve never seen a movie about us being alone. The idea of space travel is both beautiful and horrifying at the same time. I’m hugely in favour of space exploration, but sometimes exploration is also just a means of escape. This led me to a personal place, a father/son story.”

While sci-fi films like A Space Odyssey or Solaris come to mind watching Ad Astra, there is no doubt that that the underlying theme of the film owes more to Joseph Conrad’s Heart of Darkness and Francis Ford Coppola’s Apocalypse Now. Roy is the young hero experiencing doubts about the very organisations he has committed his life to, while he is sent on a mission to the planet Neptune to try to find his father, a much decorated astronaut hero who just might have gone mad.

There is no doubt this FX laden vehicle delivers all the chills and thrills that are expected from the genre, starting with the opening scene where Roy is at the top of a space antenna, a piece of equipment that is to high it pierces the Earth’s atmosphere and continues up into outer space. A sudden power surge causes several astronauts to fall off the antenna and our hero Roy jumps down several levels to shut off the power before leaping off the structure in what looks like a death plunge through space and then through the Earth’s atmosphere until finally he opens a parachute and lands safely.

While this kind of action sequence steps the tone for Roy’s further adventures throughout the film it is really Pitt’s eyes and his extraordinary performance through the film that lifts this story beyond the mundane Hollywood mindless FX vehicle into serious dramatic territory.

Pitt is supported by strong performances from Tommy Lee Jones as his father and by Donald Sutherland as his father’s retired colleague.

All the elements of a well-made Hollywood sci-fi adventure are here and Gray handles them well, infusing the story and Roy’s adventures on the Moon, Mars and other locations in this near-future space-scape with humour and irony. But if there is a reason this film is memorable it is Pitt’s performance.