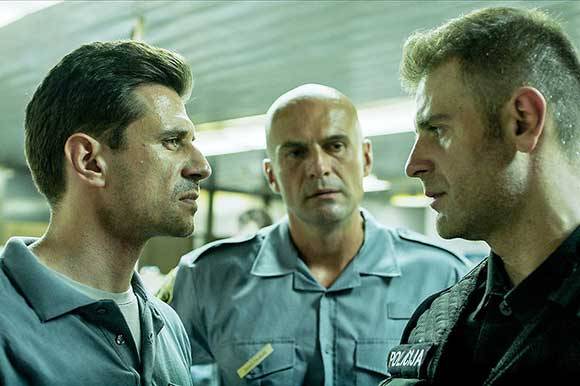 It was possible to complete production on the film, which was shot in 15 days during August and September 2018, thanks to a late grant from the Film Fund of Bosnia and Herzegovina.

Shot with an extremely small budget, Full Moon takes place at a police station during the night of the full moon. A police officer Hamza has to work that night even though his wife has gone into labour, because the police are short-staffed. To make everything worse, it seems that people showing up at the station have decided to prove the old belief about the mysterious powers of the full moon and its influence on human behaviour. In the course of that one night, representatives of all the absurdity and tragedy of life in Bosnia and Herzegovina parade through the station and somehow help Hamza get ready for a new life.

Hamzagić, who won the Special Jury prize at the Sarajevo Film Festival for his short film Damaged Goods (2015, SCCA/pro.ba), co-wrote the script with Emina Omerović. The film was shot by Amel Đikoli, with whom the director had collaborated in the past. Alban Ukaj, in the role of Hamza, heads a large cast of both well-known actors and their inexperienced colleagues.

Full Moon, which has a budget of around 90,000 EUR, is produced by Amra Bakšić Čamo and Adis Đapo from SCCA/pro.ba and coproduced by the Bosnian and Herzegovinian Radio Television (BHRT).

The film has been supported by the Ministry of Culture and Sport of Kanton Sarajevo and the Film Fund, and it was mostly shot at the BHRT.

Full Moon will have its world premiere at Cottbus.

Producer:
SCCA/pro.ba (Bosnia and Herzegovina)
This email address is being protected from spambots. You need JavaScript enabled to view it.