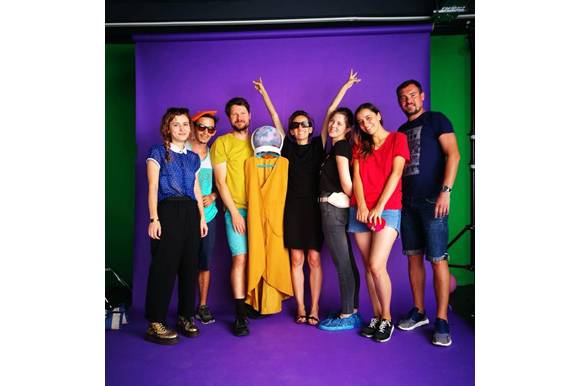 Ioana Mischie and part of her team credit: Alexandra Blejan

As modern Romania celebrates 100 years of its existence, Government of Children invited 100 children to envisage the next 100 years of the country. The project is Romania’s first transmedia civic imagination project, one of the world’s first ongoing visionary archives, in the process of being expanded gradually in more communities worldwide.

The concept will be expressed through numerous platforms such as: a state of the art 3D feature film, an expanded webseries, VR experiences and live events.

The core of Government of Children is to empower children to share their visions with regard to solving real-world problems in the short, medium and long term. How do they perceive the core-problems of our society? What potential solutions would they envisage? How would they act as young leaders? The initiative is a personal and collective incursion into the micro-histories and micro-futures of our contemporary world.

“I strongly believe that this project carries an infinite creative, educational, social and visionary depth, while stimulating us not only to explore or imagine tangible utopias, but also to trace their evolution in time. In the long term, we are trying to facilitate a smaller gap between civic imagination and civic realness, while inviting children to shape, debate and enrich their and our own futures”, Ioana Mischie said in a statement. She created the concept in 2017, during her Fulbright grant at USC School of Cinematic Arts, Los Angeles, California, and continued nationally as a PhD arts-based research project.

Technology-wise, the 3D film is shot with the new Alpha 3D Rig, with technology and know-how provided by Zsolt Magyari, Stereographer Ltd from Budapest. The 2D extensions are shot by Radu Voinea.

The project is independently produced by Storyscapes, a Romanian association focusing on transmedia and groundbreaking concepts, and Studioset, a multi-awarded creative studio. The transmedia producer is Ioana Mischie, while Sorin Baican is producing and Adrian Smarandache is the executive producer.

Research-wise, the project is nationally developed within the framework of UNATC - The Faculty of Film and CINETic, a Bucharest-based centre focusing on the intersection between arts, neuroscience and new technologies. The project is so far an independent project, being created within the range of micro-budget filmmaking.

The filming of the 3D and 2D films began in August 2018. The first transmedia extensions of the project will be nationally launched in the autumn of 2018.

Studioset
https://studioset.tv
This email address is being protected from spambots. You need JavaScript enabled to view it.