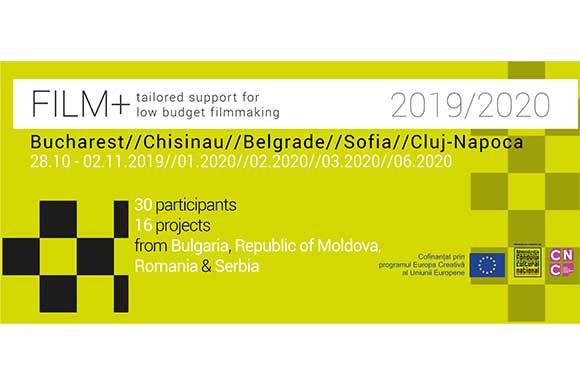 BUCHAREST: Sixteen feature, short and documentary independent film projects from Romania, Serbia, Bulgaria and the Republic of Moldova have been selected for the 4th edition of the workshop FILM+, set to take place in Bucharest on 28 October - 2 November 2019. FILM+ focuses on micro budget productions: fiction, animated, documentary and video-art projects.

Seven feature films, five short films and four documentary projects have been selected from the 73 projects that were submitted. After Bucharest, working sessions will take place in Chișinău, Belgrade and Sofia in the first part of 2020.

FILM+ focuses on the development, production and promotion of micro budget projects and it is the first project of this kind from the Central and Eastern Europe region supported by the Creative Europe- MEDIA Programme. FILM+ is also supported by the AFCN and the Romanian Film Centre.

The workshop was initiated in Romania by director Paul Negoescu, producer Anamaria Antoci, cinematographer Ana Drăghici and cinema and audiovisual consultant Alex Trăilă through Asociația Graphis 122. They will also be the tutors together with director Tudor Jurgiu and editor Alex Radu. The list of mentors includes director Andrei Ujică and Dana Bunescu, who directed and edited the acclaimed The Autobiography of Nicolae Ceaușescu (ICON Production).