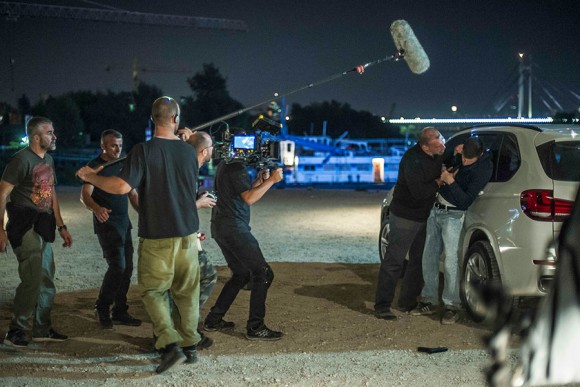 The shoot of My Father's Killers by Predrag Antonijević in Belgrade

BELGRADE: Serbian helmer Predrag Antonijević is in production with the TV series My Father’s Killers / Ubice moga oca, a 10-episode crime drama about a young inspector on his first big case. The local media labeled it as the “Serbian True Detective” and a second season is already being planned.

My Father's Killers follows Aleksandar Jakovljević, a young police inspector who is assigned his first big case: solving the murder of the only daughter of a respectable construction entrepreneur. As the investigation unfolds, Aleksandar is torn between two women working with him on the case: Jelena, a young lab intern, who he is truly in love with, and Marija, a prosecutor, who he is in a relationship with. Moreover, Aleksandar discovers that the death of his own father, also a police inspector, is oddly connected to his case.

The main characters are played by Vuk Kostić, Tihomir Stanić, Nebojša Glogovac, Katarina Radivojević and Nina Janković. Uglješa Jokić and Anđelija Vlaisavljević are executive producers through Serbia’s Work in Progress along with the Serbian national broadcasting company, RTS. The budget hasn't been disclosed. Shooting started on 25 June 2016 and will wrap on 20 September 2016. All 66 shooting days are spent on location in Belgrade.

According to Work in Progress, crime dramas have a great selling potential, which will contribute to the popularisation of the Serbian police. Miodrag Stevanović, the showrunner, hopes that My Father's Killers will mark the beginning of a tradition of such series on the domestic TV market.

The series is set to premiere on 28 October 2016. Currently, TV rights belong solely to RTS.

Work in Progress
Trešnjinog Cveta 11
11 070 Belgrade, Serbia
Phone: +381 11 715 77 00
www.wipbelgrade.com
This email address is being protected from spambots. You need JavaScript enabled to view it.