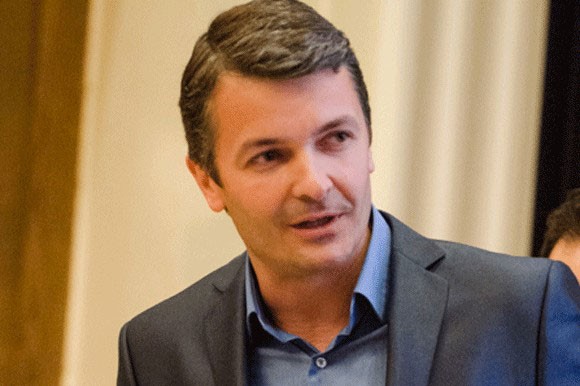 FNE and Europa Distribution are launching a new chapter in our Distributor of the Month section focusing on new trends and challenges of film distribution. In the coming months we will talk with European distributors about the digital single market and VOD, trying to understand how they see the future through these lenses.

This month we speak with Igor Stanković, the CEO of MCF MegaCom Film, the distribution company he created in 2004. Igor Stanković was recently appointed to the Order of the Knights of Arts and Letters by the French Ministry of Culture for the promotion of French and European culture. He is a member of the Board of the Yugoslav Cinematheque and received two significant awards in 2014 - the Captain Misa Anastasijevic Award (the biggest for film and culture in Serbia) and the Plaque of the Yugoslav Cinematheque for his contribution to the film industry.

MCF MegaCom Film is now the biggest distributor of European films in East and Southeast Europe and the exclusive representative of 20th Century Fox in the region. It is also the producer of two film festivals - Children KIDS FEST and Auteur Film Festival.

With the largest VOD platform, MagicBox, in cooperation with the biggest regional mobile operator, VIP mobile, and with several cinemas of which one got the prestigious title of the best Serbian cinema in the Europa Cinemas network, MCF MegaCom Film has also local offices in Macedonia (MKD MCF), Bosnia and Herzegovina (BH MCF) and Montenegro (MNE MCF).

FNE: What impact would the digital single market have on your work?

Igor Stanković: We have already treated the market as a single market within the ex-Yugoslavia region. EX YU region is composed of several countries and very often works as a single market. This is simply the expansion of the existing market from the six existing countries, which we treated as a single market, to a larger number of countries that occupy space across Europe.
So far it has been shown that whatever has the potential for broader exploitation will have representation in all markets, while what doesn't will remain and continue to be locally determined and will not affect the unified single market.
We will try, as everyone else, to direct our business towards better and wider exploitation of the festival, cinema distribution and better placement through all forms of television exploitation, as we have done so far in the past, because local distributors will not be that much involved and will not get that much benefits from the digital single market because simply we do not own the global rights.

Igor Stanković: From the moment it appeared, VOD has been a very important segment of our work. From the first days after its appearance, the VOD market has constantly been growing, especially because the DVD and BD market completely stopped and became non-existent. VOD platforms are the perfect platforms for bridging and filling out the time between the festival / cinema exploitation until the moment of screening on TV. Additionally, VOD brings income without any additional larger financial investment, which was once the case with DVD and BD.
The share of revenue from the VOD in business is not something that determines our crucial business and investment in new content, but it represents a foundation on which we build our future, when VOD based revenues will become an indispensable and important part of the income.

FNE: Where do you see VOD five years from now?

Igor Stanković: On an even greater and more significant level, VOD foresees growth and development through all existing forms of exploitation and communication, as well as through new forms of access that will appear in the near future. Intentions and pursuance to build a single market, so that a couple of global internet companies would have many indispensable benefits, which will also be of benefit to all other participants in the chain (including the authors themselves), say a lot about how uniquely something like this is to be foreseen.

FNE: How can VOD distribution for independent European films be improved?

Igor Stanković: Exactly the same as the major titles. Establishment and authenticity on a number of platforms and a more smart than aggressive online campaign. By making smart, targeted offers and packages. By competitiveness and price affordability. By the festival buzz, that is to say by the faster availability of movies on a single platform, actually by shortening the period from the day of the festival / cinema distribution until the day of occurrence or parallel simultaneous cinema and VOD premieres.

Igor Stanković: There are many releases and besides well-known American indie’s such as Tom McCarthy’s Spotlight and Jay Roach’s Trumbo, there are a few European indie’s with significant results like Paolo Sorrentino’s Youth, John Crowley’s Brooklyn or Carol by Todd Haynes.
There are no big differences in releases and promotions between indie titles, and the online promotion and also theater brandings, which we do for the studio titles. But at the same time we do prior screenings in a more targeted way. Also we create a buzz between the groups, which the movies are targeting, and try to have as strong a word of mouth as we can, and that was the main strategy for each of these successful titles.
Booking in these particular few cases for these successful releases has been more targeted to the city center cinemas supported with festival screenings. These are movies for all generations and the mature audiences recommend them to the youngsters more than viceversa.