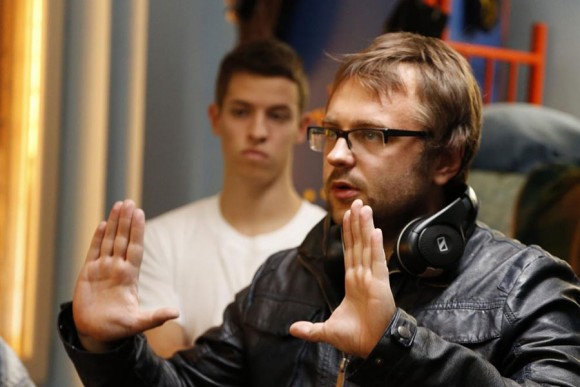 Mladen Djordjevic on the shoot of Gastarbeiter Stories

BELGRADE: After taking a break to serve on the programming team of the Belgrade International Film Festival – FEST, Serbian helmer Mladen Đorđević is back in the director’s chair with Gastarbeiter Stories / Sumrak u bečkom haustoru. The film has wrapped production and is currently in postproduction.

The film is a road movie about Serbian people living between Vienna and ex-Yugoslav countries, travelers who live neither in their home country nor their adoptive one, but are always somewhere in between and therefore strangers in both lands. The protagonist is Dark Markov, a real Viennese taxi driver, writer and poet, who, while driving on the streets of the Austrian capital, finds the inspiration for his novel about the hard life of Balkan “Gastarbeiters” – foreigners employed in Austria, known as “guest workers.” After the critical acclaim of his novel and monodrama, Darko decides to go a step further and transpose this experience into a play, giving the roles to real people, those who inspired him in the first place. These are exotic characters of the likes of a taxi driver, a fortune-teller, a construction worker and loners living on the streets of Vienna. Đorđević found the inspiration for this film upon reading Darko Markov’s novel and play.

The project was first financially backed four years ago by the director of Filmske Novosti, Vladimir Tomčić, who was later joined by Film Center Serbia. The film is produced by Đorđević’s production company Corona Film and co-produced by Cinnamon Production and Al Jazeera Balkans. The film’s budget is 22.9 m RSD / 181,051 EUR.

Shooting started on 20 July and wrapped on 20 September. The 90 shooting days were spent on location in Serbia and Austria.

The theatrical premiere is set for the first half of 2017, followed by the TV premiere on Al Jazeera. MegaCom Film is handling the domestic and regional distribution. No sales agent is attached to the project yet.

Filmske Novosti
www.filmskenovosti.rs
This email address is being protected from spambots. You need JavaScript enabled to view it.

Al Jazeera Balkans
www.balkans.aljazeera.net
This email address is being protected from spambots. You need JavaScript enabled to view it.