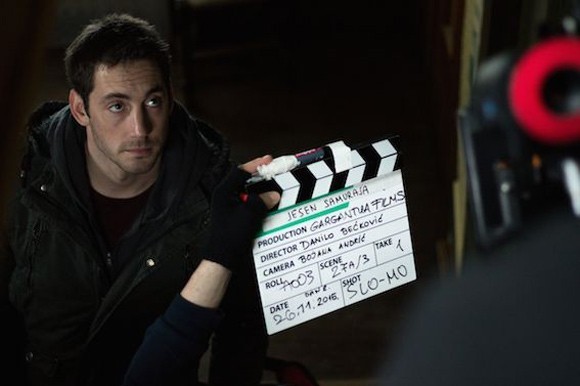 Petar Strugar in The Samurai in Autumn by Danilo Bećković

BELGRADE: The Serbian romantic comedy The Samurai in Autumn by Danilo Bećković is the top grossing Serbian film of 2016 and has set the box office opening weekend record of the year.

The film has dominated the Serbian box office and attendance for 5 consecutive weeks with 120,845 admissions.

In its initial week in distribution, ending 12 October 2016, The Samurai in Autumn attracted 45,412 viewers, outperforming Tim Burton’s Miss Peregrine’s Home for Peculiar Children with 19,820 admissions and Oliver Stone’s third-place Snowden with 9,575 admissions. During its first week in Serbian cinemas, The Samurai in Autumn earned 132,228.40 EUR / 16,305,986 RSD, which was 6% of the total of the Serbian box office. It also set this year’s opening weekend record with 32,006 admissions. According to its Serbian distributor, Taramount, the film brought Serbian audiences back to the cinema and earned more than any domestic film during its first week in 2016.

In its fourth week and weekend, the film was ahead of Edward Zwick’s Jack Reacher: Never Go Back before dropping to second place with 15,762.81 EUR / 1,943,951 RSD and 4,606 tickets sold. The Samurai in Autumn was dethroned only after five weeks of dominating the Serbian box office, when Scott Derrickson’s Dr. Strange was released and sold 9,158 tickets.

The film was released at the same time in Bosnia and Herzegovina, where it is distributed by Una Film. The total box office after 5 weeks in cinemas, combined with Serbia, reached 367,670.26 EUR / 45,352,230 RSD.

It has also been playing in Macedonia since 10 November and is being released in Croatia on 24 November by Blitz Film & Video. The Samurai in Autumn will have its Austrian premiere in Vienna on 25 November and will also have a German release in Munich.

The Samurai in Autumn was produced by Serbia’s Gargantua Films through Marko Paljić, in coproduction with Mali Budo and Cine Planet.

Shooting started in November 2015 and was divided into three phases, production resuming in April and then in July-August 2016. All 46 shooting days were spent on location in Serbia, mainly in Novi Bečej and Belgrade. The film was shot in cooperation with the Serbian Institute of Sport, the Karate Federation of Serbia, the Faculty of Sport and the Anti-doping Agency of Serbia.

Gargantua Films
www.gargantuafilms.com , http://jesensamuraja.com/en
This email address is being protected from spambots. You need JavaScript enabled to view it.

Cine Planet
www.cineplanet.tv
This email address is being protected from spambots. You need JavaScript enabled to view it.