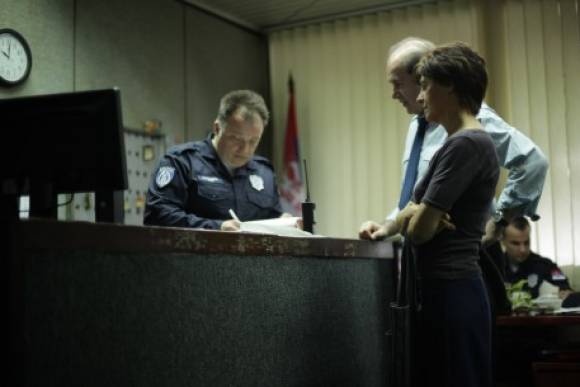 BERLIN: Serbian director Miroslav Terzić’s second film Stitches is a Serbian / Slovenian / Croatian / Bosnian and Herzegovinan coproduction with a polished and moving script by Elma Tataragic that is sure to be one of the standouts in this year’s Panorama section of the Berlinale.

Based on a historical tragedy this story is about a scandal came to light in Serbia whose resolution is still ongoing because the authorities continue to stonewall the investigation. In thousands of cases of systematic child theft over several decades, hospitals are said to have sold newborn babies with the help of a clandestine network of doctors, undertakers and government employees, and informed the parents that their child had died.

Tataragic brings the tragedy of the scandal to the viewer in human terms with the story of Ana played by Snezana Bogdanovic a Belgrade mother who believes that her son was stolen from her at birth 18 years ago. Ana was told that her son was stillborn but she does not believe it and continues to try to penetrate the wall of bureaucracy to find out if her son might still be alive somewhere.  Tataragic elegantly focuses on the psychological drama of the story and the relationship between Ana and her husband Jovan played by Marko Bacovic and her teenage daughter Ivana played by Jovana Stojiljkovic.  Rather than a mystery or a thriller the story becomes one about family relationships and what happens when there is no closure after a trauma.

Terzić moves the story along aided by a brilliant performance by Bogdanovic who as a seamstress in colourless Belgrade suburbs seems to make a nuisance of herself as she tries to pursue the truth looking for answers.  Her own family after 18 years have become exhausted from her inability to let go of what may or may not have happened. We see this in a very revealing scene at the beginning of the film as Ana offers a cake to her husband and daughter on what would have been the 18th birthday of her son if he is alive or had lived.

Ana makes a very modest income as a seamstress while here husband Jovan is a night watchman and her daughter a teenager who seems unable to relate to her mother.  Ana’s obsession with her search for the truth about what happened to her son has strained the family relationships to the limit. Having lost her son Ana risks also losing the love of her daughter.

DoP Damjan Radovanović backs up Terzić powerful storytelling with visual images that tell of the drab and gray existence Ana leads while her quest is blocked again and again by hospital records that were not kept or that are not able to be accessed.  As the story unfolds we see that this is not just one unbalanced woman but a part of a much larger true-life story that is still unresolved for hundreds of people in Serbia whose children were stolen and who cannot get the information they need for closure.