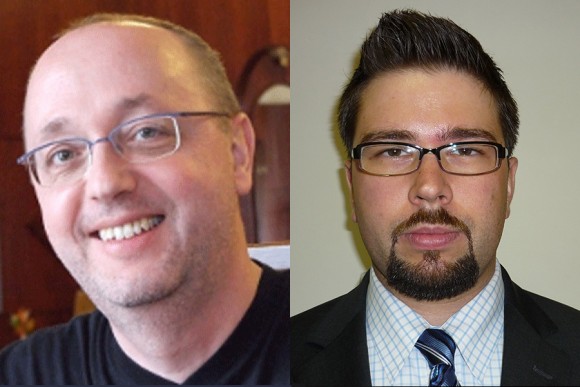 TRENČIANSKE TEPLICE: Martin Šmatlak, the head of the Slovak Audiovisual Fund, and Anton Škreko, General Director of the Media, Audiovisual and Copyright Department of the Ministry of Culture of the Slovak Republic speak to FNE about the Slovak audiovisual sector and the strategy programme for the next five-years programme (2016-2020).

FNE: The first 5-year programme launched by the AVF will come to an end in 2015. Are you happy with the results?

Martin Šmatlak: Of course I am happy! There are many more Slovak films in cinemas, many more producers and directors working. The situation is much better than five years ago.

FNE: What is the strategy of the new five-year programme?

Martin Šmatlak: We are looking for a strategy for the next five years, we are discussing it with the Ministry of Culture. I do not know what the results will be, we are at the beginning of the process of formulating the strategy.

Anton Škreko: Actually the AVF and the Ministry of Culture are working on some kind of public policy for the audiovisual sector. The results (strategy and material) should be approved by the Government for the next four years (2016-2020) by the end of 2015.

We are looking at becoming more a part of the creative industries of the audiovisual sector and we are looking for some synergy effects and maybe for some improvement of the infrastructure. We are also thinking about education and about trying to improve human resources.

The next step would be the market conditions. We are trying to find some strategy that would be more competitive with the Slovak films on the international market and on the national market as well. This goes hand in hand with the audience and with finding new forms of distribution.

We are still increasing the potential of the Audiovisual Fund itself, for example, last year we launched a new programme of film incentive schemes and we are looking forward to some big coproductions that would spend money in Slovakia.

FNE: What about the plans for a new studio near the Austrian border?

Anton Škreko: It's a private initiative, we are just waiting. If it will be successful, it would be a big project. There was no kind of state aid so far, we are just supporting the idea.

Martin Šmatlak: It's a risky project, I think, because of the investment. Slovakia is a small country with a small market. It needs a lot of private investment in order to build a new studio.

FNE: You were complaining about the lack of infrastructure in 2014.

Martin Šmatlak: Yes, of course, but what does the public sector have to do with it? Almost nothing. If somebody will take the risk, it will be a big investment.

FNE: Can the state encourage the investors to take the risk?

Anton Škreko: Yes, somehow we could take some administrative steps and insure some basic infrastructure like roads or that kind of things, but the investment should be private.

FNE: What can the Ministry of Culture to improve the technology and the infrastructure in the audiovisual sector?

Anton Škreko: We’ve created the Fund and we are cooperating with it in order to start these projects, but improving the technology is not the sole task for the Ministry of Culture. However, with the help of EU funds we are working on a project connected with the digitalisation of the cultural heritage. This project will wrap in 2015, so basically we are finishing with all the activities on this and we will see what will be the next step in 2016.

Basically what we do as a ministry is to work on the digitalisation of the cultural heritage, together with the Slovak Film Institute (sfu.sk), and in cooperation with the public broadcaster. We are also cooperating with the Slovak Film Institute (sfu.sk) on a longtime project that deals with the restoration and archiving of the cultural heritage and the film material.

This might be also a challenge for the five-year programme strategy, to have a more detailed look at the technology because what we’ve done so far was to support the production and the creative processes, but the technologies that we’ve supported were only for the cinemas. There was no other kind of support for the technology so far.

Martin Šmatlak: Maybe we should think about the postproduction technology...

FNE: Is there any chance that the government will give more money to the Slovak Film Fund?

Martin Šmatlak: We are working on that.

Anton Škreko: It's that time of the year when the state budget is negotiated by the ministers and as always we are trying to get more funding.

Anton Škreko: I think that we feel some kind of obligation from the state that the state should be a symmetrical contributor to the Fund, so now we are trying just to keep the level of 2015 which was 4.5m EUR. We hope that also next year we will get the same amount of money. This money is only for the grant scheme, the money for the incentives money is funded separately.

FNE: How was the Slovak Film Week?

Martin Šmatlak: The first edition took place in April 2015 and it was quite successful. It is very important to do an event like this not only for the audience but for the industry. There were very interesting discussions. Maybe next year the Slovak Film Week will connect with the Slovak National Film Prizes. Anyway, it's an event organised by the Slovak Film and TV Academy), we are only supporting them, as the Fund is just a grant funding institution.

FNE: There was a panel discussion about the strategy for 2016-2020 during Art Film Fest. Were there any decision taken during this panel?

Anton Škreko: It was more meant to launch a discussion about the strategy. We just agreed that we should see the AVF sector as a whole ecosystem, and if we start any kind of support, financial or non-financial, it should focus on the whole ecosystem and balance all the activities – development, production, distribution and so forth.

Martin Šmatlak: It was very important to get all the people from the audiovisual sector together, not only filmmakers and producers, but also TV broadcasters, private TV broadcasters, big TV distributors ,the  Slovak Film Institute, and film schools in order to find out what should be the next steps.

FNE: What is the next step?

Martin Šmatlak: Maybe the main problem we’ve talked about is the situation in the public Slovak Television. It is not stabilised, and it has problems that have hanging around for 20 years. We need it to be stabilised because it is an important institution for the whole audiovisual sector.

FNE: Is it true that the legal framework supporting the public television from the monthly fees paid by the subscribers is under discussion?

Anton Škreko: We are not going to change the system. The problem is that the fees paid by the people are too low. They haven’t been increased in the last 11-12 years, and they’re maybe the lowest in the region, 4.64 EUR per household per month. In the end it’s about 75m EUR of the budget.

That’s a real problem and not only for the public broadcaster and its programmes, but also for film production because there are also a lot of productions and coproductions with the industry. We think that it is helping a little bit that the contract with the state (similar to the one that BBC has) brings some extra-money for the independent productions.

FNE: So the idea is to increase the fee.

Anton Škreko: Basically the idea is to increase the fee. Actually it is some kind of political decision, but since we have elections in March 2016, I don’t think that something is going to happen until next year.

FNE: What are the other weak points which need to be fixed in the next five years?

Martin Šmatlak: We have to discuss the system of support of the audiovisual industry, the so-called incentives, and see if the threshold which is set at 2m EUR per project as a private investment is not too high for the domestic productions. We have to improve the audiovisual sector also as an industry.

Anton Škreko: This is the basic vision. A lot of small steps should be done. This is basically in order to make not the audiovisual but the whole cultural sector in Slovakia a place which, together with the production of cultural values, is also a place where one should be interested to invest.

This is the core vision that we are applying, the idea that culture is not only about consuming money but also a way to produce money and to be an investment opportunity for private money. We are trying to apply this idea in all the strategies we are working on, and we did work on in the past three or four years. We hope that we will continue this work in future.

Martin Šmatlak: We are discussing the conditions to do it in the most efficient way, and maybe we will launch them in 2016. We are giving soft loans for cinema digitalisation. The process of digitalisation finishes in 2015, but we are giving some support for the infrastructure of cinemas (modernization of the interiors, seats etc.). This goes for one-screen cinemas, we are not supporting multiplexes. We have around 80 one-screen cinemas in Slovakia, most of them are old cinemas.

FNE: Do you think that the number of the feature films produced in Slovakia will grow in 2015 compared to 2014?

Martin Šmatlak: I don’t know, I think if there will be 20-25 feature films per year it should be enough for a small country as Slovakia.

FNE: Where do you see the fund five years from now?

Anton Škreko: The leading European Fund!! Maybe not in terms of the budget, but in transparency and in the effectiveness of all the processes. Why not?