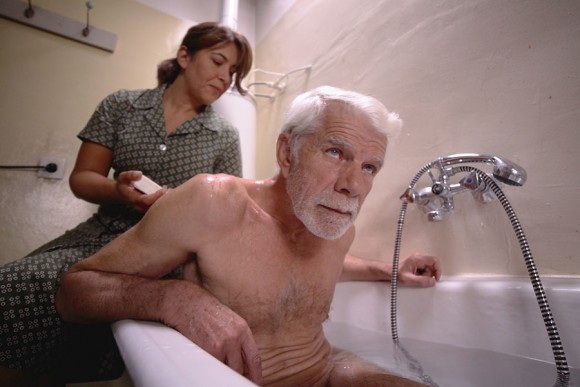 A Comedy of Tears by Marko Sosič

PORTOROZ: Marko Sosič’s A Comedy of Tears / Komedija solz will be screened in the competition of the 19th Slovenian Film Festival in Portorož (13-18 September 2016). The film tells the story of an elderly cynical man, who lives in a wheelchair in a spacious flat in Trieste. The main character in this psychological drama is played by the Slovenian actor Ivo Barišič.

Albert, the main character, is surrounded by obsessive memories, in which his unresolved relations with family members reside, as he distanced himself from them a long time ago. His only contact with reality is Ida, an educated middle-aged lady, who comes twice a week to clean up, cook and bathe him.

The film was produced by Boštjan Ikovic through Arsmedia in coproduction with Iridium Film, MB Grip and Zvokarna. The project was supported by the Slovenian Film Center with 150,000 EUR and by Italian Radio Television RAI, Regional center for Friuli Venezia Giulia – Slovene programme. The technical support was provided by FS Viba in equipment valued at 70,121 EUR. The total budget was 322,601 EUR, without additional and promotional costs, Ikovic told FNE.

The film was shoot on the Slovenian coast (village Korte, Koper), in Ljubljana and also in Trieste, Italy from August to September 2015. Its domestic release is scheduled for January 2017.

Writer /director Marko Sosič studied in Trieste and Zagreb. He has written four novels and two collections of short stories, and has directed several theatre plays in Trieste, Ljubljana and in Rome. He also worked for the TV.

4220 Škofja Loka, Slovenia
Phone: + 386 41 402 909
This email address is being protected from spambots. You need JavaScript enabled to view it.
www.iridiumfilm.com