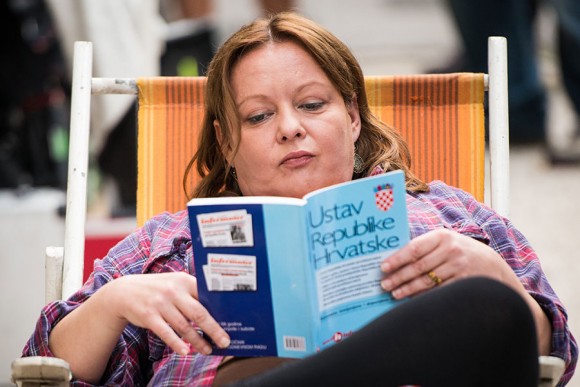 PORTOROŽ: Croatian/Czech/Slovenian/Macedonian coproduction Constitution / Ustav Republike Hrvatske by the acclaimed writer/director Rajko Grlić will be screened in the competition of the 19th Slovenian Film Festival in Portorož (13-18 September 2016). The film won the Grand Prize of the Americas (Best Film) at the 40th World Film Festival in Montreal on 5 September 2016.

Four people who live in the same building could not be more different from each other. They all have their own social status, sexual habits, nationalities and religions. They would never exchange a word if it wasn’t for some misfortunate events that push them together. Slowly and painfully, they begin to open up to each other.

The film was produced by Ivan Maloča through Interfilm in coproduction with Rudolph Biermann through Czech In-Film, Jani Sever through Slovenian Sever&Sever, the Croatian Radio Television HRT and NP7, Macedonian Revolution Production and Mike Downey through Film and Music Entertainment from UK. It was supported by the Slovenian Film Centre (with 60,000 EUR), the Croatian Audiovisual Centre, MEDIA Sub-programme (with 30,000 EUR) and Eurimages.

“Constitution skillfully deals with the hard topic of hatred, with the wittiness and well known affection of Grlić. I wish to thank Mr. Rajko Grlić for his trust, which enabled us to contribute our share and cooperate in the making of the film in which we believed from the first draft,” coproducer Jani Sever said before the screening in Portorož.

Sever&Sever d.o.o.
Trubarjeva 21a
1000 Ljubljana, Slovenia
Phone: +386 51 44 99 33
This email address is being protected from spambots. You need JavaScript enabled to view it.
http://www.seversever.com/