FNE at Cottbus Film Festival 2016: Houston, We Have a Problem! Featured 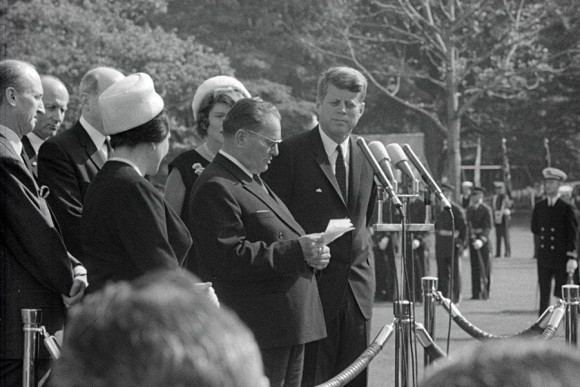 COTTBUS: Žiga Virc’s first feature, the docu-fiction Houston, We Have a Problem! / Houston, imamo problem!, will be screened in the main competition of the 26th Cottbus Film Festival (8-13 November 2016).

This Slovenian/Croatian/German coproduction explores the myth of space conquest as it unfolds in Yugoslavia of the 1960’s, in fictional documentary genre-crossing style.

In March 1961, Yugoslavia sold its secret space programme to the US. Two months later, Kennedy announced that the USA would go to the Moon. This created an urban myth that millions of people wanted to believe. This myth is explored through the character of Ivan, a senior engineer in the alleged Yugoslav space programme, using some original, unseen documentary materials.

The film was shot in 47 days between April and October 2014 in Slovenia, Croatia, Serbia, Austria, Morocco and the US, producer Boštjan Virc told FNE. Since its release in Slovenian cinemas in spring 2016 (distributed by 2i Film) the film has been unexpectedly successful with 18,000 admissions. The film is Slovenia’s 2016 Oscar bid and won the main prize of the 19th Slovenian Film Festival.

Studio Virc, d.o.o.
E: This email address is being protected from spambots. You need JavaScript enabled to view it.
http://www.studio-virc.si

Nukleus film d.o.o.
This email address is being protected from spambots. You need JavaScript enabled to view it.
www.nukleus-film.hr