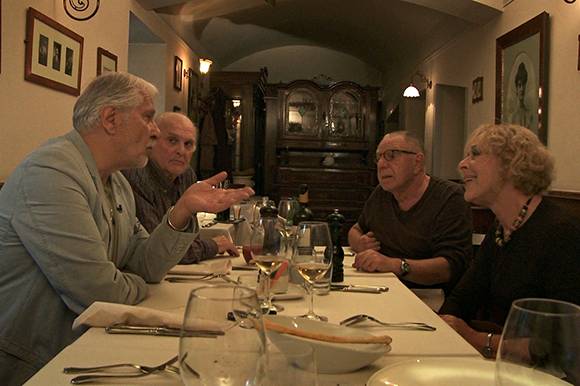 PORTOROŽ: The Slovenian/Croatian coproduction Every Good Story Is a Love Story by Matjaž Ivanišin and Rajko Grlić will be screened in the competition of the 20th Slovenian Film Festival in Portorož (12-16 September 2017). This documentary follows the production of the theatre play Boris, Milena, Radko and the four well-known people involved in it: writer/director Dušan Jovanović, actress Milena Zupančić and actors Radko Polić and Boris Cavazza.

Following a four months process from the first rehearsal to the opening night, as well as the intimate lives of the artists, the film tells a universal story of the relationships between the real world and the imagination, between the intimacy and the public aspects of art.

“The film tries to determine how much of what we tell is exhibitionism, and how much of it is a sincere and sometimes painful self-confrontation,” directors Rajko Grlić and Matjaž Ivanišin told FNE.

Every Good Story Is a Love Story  / Vsaka dobra zgodba je ljubezenska zgodba was produced by Danijel Hočevar through Vertigo, in coproduction with NP7 and in collaboration with NuFrame and 100, with a budget of 80,166 EUR. “Vertigo contributes 90 % and NP7 10 % of the total budget,” producer Danijel Hočevar told FNE. The project received 55,000 EUR in support from the Slovenian Film Center.

The film was shot at the SNG Drama Ljubljana Theatre, when the actual play was produced. Shooting took place in spring and autumn 2013.

The film is scheduled for an art house cinema release in autumn/winter 2017.

Vertigo
www.vertigo.si
This email address is being protected from spambots. You need JavaScript enabled to view it.

NuFrame
www.nuframe.si
This email address is being protected from spambots. You need JavaScript enabled to view it.