PRODUCERS ON THE MOVE 2014 meet at Cannes Film Festival 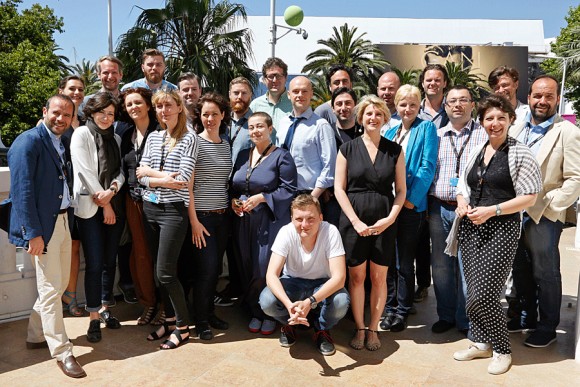 Groupshot Producers on the Move 2014

24 outstanding film producers from across Europe, carefully selected by European Film Promotion's member organisations, are taking part in EFP’s networking platform, PRODUCERS ON THE MOVE, at the Cannes International Film Festival from 17-19 May.

In its 15th year, EFP again spotlights emerging European producers at Cannes who are eager to exchange know-how and to cooperate on an international level. EFP's programme results each year in several new trans-national co-productions and gives the producers a higher profile in Cannes.

The schedule of PRODUCERS ON THE MOVE includes working sessions, one-to-one speed-dating meetings and various opportunities to follow up discussions on future projects.For the first time, Eurimages has prepared a case study exclusively for EFP's programme which has been financially supported by the MEDIA Programme (2007-2013) of the European Union and the participating EFP member organisations.

Detailed information about PRODUCERS ON THE MOVE 2014 at www.efp-online.com

Interviews with this year's PRODUCERS ON THE MOVE are published at EFP's media partners' websites: www.cineuropa.org and www.filmneweurope.com

More in this category: « Invitation to participate in My First Script Workshop at the 12th Zagreb Film Festival Transilvania IFF representatives at Cannes 2014 »
back to top