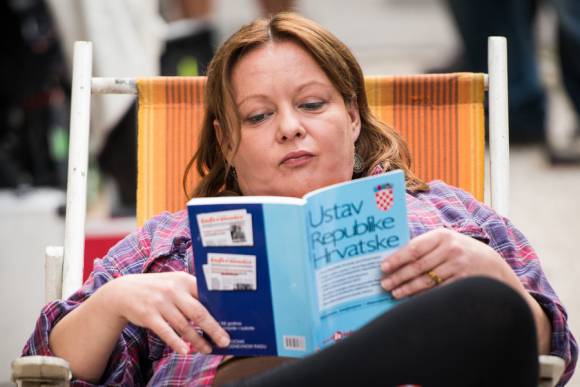 Rajko Grlic’s latest feature film The Constitution, which has now clocked up a remarkable 23 festival awards since its world premiere in Montreal 2016, has also been included among the titles announced by the European Film Academy as feature fiction films recommended for a nomination for the European Film Awards 2017 . This “love story about hate” is a Croatian-Czech-Macedonian-Slovenian-UK co-production.

Four very different people live in the same building but avoid each other because of differences in how they live their lives, what they believe in, and where they come from. They would probably never exchange a word, but misfortune pushes them towards each other. Their lives entangle in ways that profoundly challenge deep-held beliefs and prejudices surrounding material status, sexual orientation, nationality and religion.

Slowly, and even painfully, they begin to open up to each other and recognize the essential humanity each of them possesses.

Can a person deeply immersed in prejudices and hate even begin to understand how another human being feels? And can someone like that take a step further and reveal a loving personality beneath the mask of icy detachment?

These are the questions this film seeks to explore and answer. And, it seems, these questions are very well known to people around the world.

The controversies follow “The Constitution” due to its emotional story involving hate, prejudice and intolerance for the differences between the nationalities, gender, religion and sexual orientation. The fact that right-wing conservatives find the film highly controversial and almost insulting proves that it hits the target with its unique, strong and sometimes humorous storytelling, with interesting and complex characters led by famous Serbian actor Nebojsa Glogovac in the leading role of Croatian patriot and school professor with a secret.

On one occasion, Rajko Grlic stated: „If the saying "Hate is local!" is true, and I believe that it is, then every local hate, like the one this film is about, will be comprehensible to each person in Europe who has ever hated or been hated."

The critics are nevertheless unanimous regarding the film:

"A wonderful example of a complex story that plays with various kinds of prejudices. A heavy topic that becomes accessible through irony and light tones." – 18. European Film Festival, Lecce, Italy

"The Constitution, by Croatian director Rajko Grlić, touches your heart and soul — and lingers in your mind longer and deeper than any blockbuster loaded with an overabundance of special effects.” – Culture LA

“Ultimately, what won us of The Constitution is its ability to speak to people living and not of dead ideas. And this is not in the form of "tragedy" the story and the characters that animate it. On the contrary, he speaks of those "difficult things" with a hint of a smile, with a warmth and love that you can try to even the most negative character.” - CineClandestino.it

It is the film worth watching and definitely a film to be considered for an EFA nomination.

Press materials are available on http://www.theconstitutionmovie.eu/en/

Last modified on 2017-09-20
Tweet
More in this category: « Central and eastern European talent ready to fly at prestigious documentary showcase Romania as seen by documentary filmmakers, at Astra Film Sibiu 2017 »
back to top