What’s on the Menu for Czech Animation in 2019 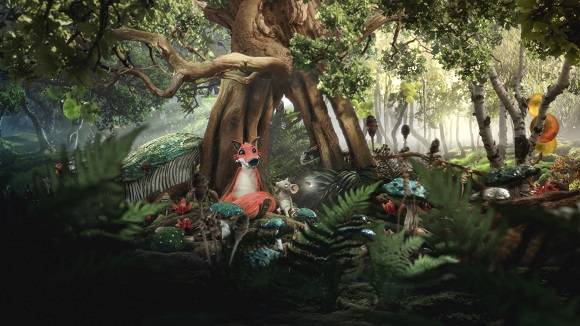 Even Mice Belong in Heaven

The year 2018 did not yield any box office hit in the field of Czech animation, yet festival showings and achievements abroad imply that our creators are not resting on their laurels. There are a number of interesting feature films, series, and TV bedtime-story animations in development or production. They will also include this year's anniversary of the fall of the Berlin Wall, the 50th birthday of Lucky Four or one hundred years since the death of historical Czech figure Rastislav Štefánik.

And How Did Czech Animated Production Do Last Year?

Four feature films by Czech filmmakers came to cinemas. One of them made it among the top 50 most visited: Pat & Mat: Winter Adventure, directed by Marek Beneš, attracted nearly 88,000 viewers, while the American animated Hotel Transylvania 3: Monster Vacation brought in nearly half a million. The highly anticipated and latest film by Jan Švankmajer Insects was released after seven years of production and nominated for the Film Critics’ Awards. In December, cinema-goers had a chance to see the Christmas story of Mimi & Lisa: Christmas Lights Mystery (directed by Ivana Šebestová and Katarína Kerekesová). Famous personalities such as Dagmar Pecková, Arnošt Goldflam, Linda Rybová or David Prachař supported its creation via voice over.

The feature film Harvie and the Magic Museum, which was attended by more than 200,000 spectators in our cinemas, drew attention abroad and last year became the best-selling Czech animated film of modern history. "In Czech standards, Harvie is doing great in the world. We have made sales to 90 countries, and although it is mainly a popular-audience film, it has been selected for the main competition at 26 festivals. Perhaps the biggest surprise for us is the success of the film in the US, where it made it to seven festivals and even won the Best Animated Feature Film award in San Diego", says the producer Martin Kotík from Rolling Pictures.

"The feature film category is extremely demanding for the producers. At present there are not enough funds in the Czech Republic to cover proper development and production; the only solution are international co-productions. The aim of the Association of Czech Animation Film (ASAF) is to promote and develop animation as an important part of the creative industry. I believe that 2019 will be a turning a point and Czech animation will regain its reputation abroad again," Martin Hovorka, Chairman of ASAF, sums up the five-year activity of the association.

The 12-minute puppet Charlie the Snowman's Christmas Wedding by Petr Vodička produced by the Anima Studio won the Audience Award at the Biennial of Animation Bratislava and was released in France, Belgium and Luxembourg in November.

The category of short films is traditionally the domain of students, who have long been collecting various awards. Let us mention last year's unparalleled success of the lovely Fruits of Clouds by director Kateřina Karhánková, nominated for the Emile European Animation Awards. The film was broadcast by Czech Television before Christmas. With more than a hundred festival releases, it is one of the world's most successful Czech films in recent years.

An interesting novelty is the combination of the animation and documentary genres. The talented Czech-Vietnamese illustrator and Film Academy of Performing Arts student Diana Cam Van Nguyen drew attention with her animated documentary The Little One, and last year she presented her next work, Apart, using the techniques of feature and animated films to address the theme of life after losing a loved one in a captivating way. The film has already carried off the award for the Best Czech Experimental Documentary at the Ji.hlava International Documentary Film Festival and was selected for the prestigious International Film Festival in Rotterdam this year.

Last year also marked the appearance of the first Czech queer animated film – Days Off by director Filip Blažek, awarded at Famufest and the only Czech representative at the Queer Lisboa Festival in Portugal.

Currently, the final work is taking place on the student co-production project Trojhlas, which is being made in parallel at three Czech art schools – the Film Academy of Performing Arts, Academy of Arts, Architecture and Design and Ladislav Sutnar Faculty of Design and Art at the University of West Bohemia. The project is supported by the Czech Film Fund and produced by the MAUR film studio. Its release will be accompanied by an exhibition of puppets and sets used in the film, which was co-financed by crowdfunding.

The short grotesque The World's End directed by Martin Kukal, a representative of the emerging generation of promising graduates from the Animation department at Tomas Bata University in Zlín, is going into production at the Zlín based studio Kouzelná animace.

To mark the 30th anniversary of the fall of communist regimes in Central Europe, the feature film Fritzi Miraculous Revolutionary Tale is to be released in cinemas, a story about a childhood friendship that can knock down Walls. A German film in international co-production (studio MAUR film for the Czech Republic) describes the political events of autumn 1989 in Leipzig from the point of view of a 12-year-old heroine.

This year is marked by yet another jubilee – 50 years of the legendary comic book Lucky Four. A celebratory release of the Great Adventures of the Lucky Four, directed by Michal Žabka, is scheduled for April 2019. The Great Adventures will consist of four short films based on the newer themes by the “spiritual father” of Lucky Four Jaroslav Němec.

On the occasion of the 100th anniversary of the death of Rastislav Štefánik, director Noro Držiak is preparing a feature film with animated elements The Impossible Voyage for this spring, which deals with the life and tragic death of one of the founders of our country.

TVMiniUni and the Thief of Questions by director and screenwriter Jan Jirka, which combines puppets, actors and animation, is to come to cinemas this summer. The film, made entirely in Zlín, builds upon 144 parts of the TvMiniUni programme of Czech TV’s children’s channel ČT: D.

Directors Denisa Grimmová and Jan Bubeníček are making a feature based on the bestselling book Even Mice Belong in Heaven, in which they combine puppet and computer animation. Alice Nellis and Richard Malatinski were involved in the screenplay work. The main producers are the Czech companies Fresh Films and Hausboot Production; the film is made in a Czech-French-Polish-Slovak co-production. The premiere is scheduled for 2020.

Next year, another co-production feature film The Crossing by French director Florence Miailhe will set out into the world. The film is being created with a remarkable technique of oil painting in the MAUR film studio in Prague.

The upcoming film by Filip Pošivač Tonda, Slavka & Genius (nutprodukce), awarded by Eurimage for Best Development at the Cinekid festival, and Martina Duda’s Rosa & Dara (Bionaut in co-production with Czech Television), will surely also be worth our attention. Both films were supported by the Czech Film Fund and should be finished in the upcoming years.

Production of TV bed time stories is a special category. Hungry Bear Tales (dir. Alexandra Májová and Kateřina Karhánková), whose pilot episode Blueberry Hunt was awarded the Golden Slipper for the best animated film at the Zlín Film Festival 2018, is now being created. The Prague Eallin Studio continues the production of new parts of the Smallest Elephant in the World tale. At Film Node Zlín, film director Pavel Ondrašík is working on the animated children's series Barney the Piglet, which is to be finished in less than two years.

A unique opportunity for local artists are the Anomalia summer workshops, where filmmakers can develop their animation projects in the presence of foreign professionals from studios like Disney and Pixar. Last year offered participants a chance to try out a new technique of film animatic development using virtual reality, which turns out to be one of the directions of contemporary animation. The Anomalia Incubator to support the development of new project stories and visuals will be held again in Litomyšl in July and August 2019.