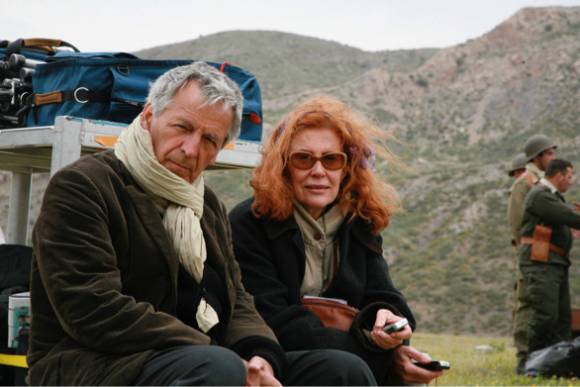 From March 10th to 14th, the director Gosta-Gavras and sound editor Eddy Joseph will attend the Film and TV Faculty of the Academy of Performing Arts in Bratislava.
The 9th Visegrad Film Forum will offer more than the screening of their well-known movies. The rich audiovisual program will be complemented by lectures in an informal atmosphere, so that everyone can learn more from the world of cinematography.

A Greek Who Hit It BIG in France and Conquered Hollywood

After his family moved from Athens to France in 1945, Costa-Gavras began to study law, but his passion for film made him change his studies. Costa is one of the most important directors in France. His works often depict political dramas and conflicts, and he does not conceal his leftist feelings. He began his film career as an assistant of the director René Clair. His first film, The Sleeping Car Murderers (1965), based on a well-known book, had a major impact, as it was particularly popular with the general public.

His film Z (1969), based on a real case of assassination of a Greek politician, brought him a great success abroad. He won an Academy Award – Oscar – for Best Foreign Language Film and two Cannes Awards for this movie. Another movie that scored worldwide was the political thriller Missing (1982). It again follows the real story of the kidnapping in South America. The film earned him an Academy Award Best Screenplay and threIn the following years, Costa worked alternately in the US and France, creating other politically tuned films. His latest film Adults in the Room (2019) describes the events in Greece in 2015, when the Greek economy went into the biggest crisis. This film is the first one he shot in his native Greece and it competed at the Venice Film Festival. The film will be presented by the International Film Festival FEBIOFEST Bratislava, which, like the last year, takes place at the same time as the Visegrad Film Forum and Costa-Gavras will be the guest of both of these events.

A Filmmaker Who Gave the Sound to James Bond, Pink Floyd and Harry Potter

During the Visegrad Film Forum, the sound editor Eddy Joseph from Northern Ireland, will talk about how to create an atmosphere of a movie using sound. He won two most prestigious British BAFTA Film Awards for Best Sound - the first one for the iconic musical movie Pink Floyd: The Wall (1982), and the second, for one of the James Bond films with Daniel Craig called Casino Royale (2006).

"I want to teach the people to listen, and how they can just do that you can enhance and soundtrack. You can read script and tell from what the movie is supposed to sound like in the end. I believe that now-a-days people are not being taught that,” says Eddy Joseph.

He also worked as a sound supervisor for well-known titles such as Harry Potter and the Philosopher's Stone (2001), King Arthur (2004), Cold Mountain (2003) and United 93 (2006). He cooperated with the director Allan Parker not only on a musical film with animated segments by political cartoonist Gerald Scarfe, which is based on Pink Floyd album of the same name, but also on six other films, such as Angel Heart (1987), The Commitments (1991) and Evita (1996). In addition, Eddy collaborated for a while on also with the director Tim Burton on his films Batman (1989), Tim Burton's Corpse Bride (2005) and Charlie and the Chocolate Factory (2005).

Filmmakers Who Worked with Jarmusch, Trier, Polanski or Participated in the Creation of the Popular TV Show Friends

To the 9th year of the international event is also invited Jim Stark, the producer of independent films, who helps independent filmmakers actually turn their dream into reality. At the beginning of his career, he worked with the director Jim Jarmusch. Debra McGuire, the costume designer of the well-known TV show Friends, is coming from the USA to our Forum too. Another female guest is Molly Malene Stensgaard, who is a longtime editor of the famous Danish director Lars Von Trier. Last but not least, is our guest from Poland, the cameraman Pawel Edelman, who has worked on several films with Roman Polanski and Andrzej Wajda.

Last modified on 2020-02-12
Tweet
More in this category: « Cartoon Business 2020 - Scholarship application °efp producers on the move at the cannes film festival 2020 »
back to top