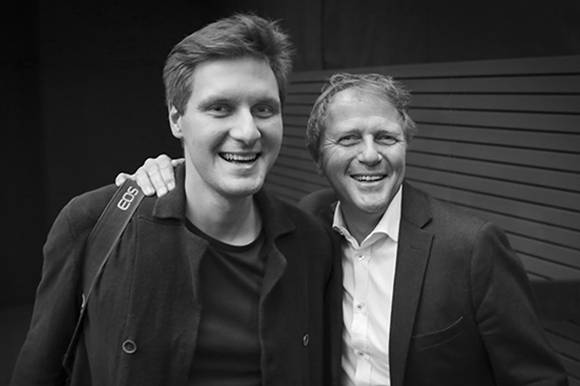 FNE and Europa Distribution are launching a new chapter in our Distributor of the Month section. In the coming months we will talk with European distributors about their line-up, their best marketing campaigns developed for different windows and what advice they would give to a new distributor.

This month we speak with Ivan Hronec, the founder, owner and CEO of Film Europe Media Company. With offices in Prague and Bratislava, and also in London and Cannes, Film Europe is a media company specialised in financing, development and production, distribution, sales and publishing, consulting and broadcasting of European films.

In November 2017, Film Europe Channel is celebrating its six-year anniversary.

Ivan Hronec: Film Europe distribution's business model and consequently lineup are not about the quality of one individual film. We are always dealing with films that are glued together by one strong programming idea, which creates a saleable distribution model for cinemas, VOD platforms and TVs.

Our main “product” is not an individual film, we are following three main programming clusters:

Our flagship is Be2Can, which will be having its 5th edition has already secured a firm position on the Czech and Slovak markets.

Besides the winners such as The Square by Ruben Östlund [Cannes 2017], On Body and Soul by Ildikó Enyedi [Berlinale 2017] and The Woman Who Left by Lav Diaz  [Venezia 2016], we had premiered Loveless by Andrey Zvyagintsev, 120 BPM by Robin Campillo, A Gentle Creature by Sergei Loznitsa, You Were Never Really Here by Lynne Ramsay, The Killing of a Sacred Deer by Yorgos Lanthimos, Jeanette, the Childhood of Joan of Arc by Bruno Dumont and Western by Valeska Grisebach.

Right after Be2Can, all those films will go to a standard distribution with the strong Be2Can identity and marketing.

Ivan Hronec: The best cinemas are those that cooperate fully on Be2Can project – Lucerna and Evald in Prague and Lumiere and Mladost in Bratislava, plus dozens of regional cinemas in the Czech Republic and Slovakia.

Yes, we have one small art house cinema in Bratislava, Kino Film Europe but let me add that distributors should not be exhibitors at the same time. This cartel ownership is crippling the market. There is just one art house cinema, which is kind of independent in Prague [Lucerna], and almost all the other art houses are operated by distributors. Same story in Bratislava, where the state run Lumiere cinema is very close to a distribution company.

This is indeed a topic to be discussed in a larger forum. Perhaps we should seriously consider a sort of US anti-cartel legislation, which bans cross ownerships of cinemas, studios and distribution. We have a pay TV project in the Czech Republic, Slovakia, Netherland and Belgium. In Amsterdam (based on my information) there are 14 one-screen cinemas of which none is owned by a distributor. If this is indeed true, then we have a problem.

Ivan Hronec: Perhaps the question is not entirely relevant. Film Europe could formally answer: something from cinemas, almost none from TVOD and DVD, and the majority from SVOD and TV. As far as net profit is concerned, then the ratio is 9/0/1/90. 90% because we have our own linear and SVOD pay TV channels. The point is that we should consider at least three other significant sources that are not mentioned:

Income from sales and concession are important for all cinemas including art houses. Around 50% of income is from ticket sales and around 50% from beers, drinks and snacks. Screening art house films is one business leg, a trendy bar the second one and public money the third one. Public money is a daily reality for all of us. Festivals, producers, distributors, cinemas are happily vampirising sources of public support. The question is not whether, but to what extend, though.

Film Europe, for instance, is getting 7.6% annually from European and national public sources. The rest is income from sales. If you have a company with more than 40% from public sources or barters from state television or city governments, then a company is indeed a public money company, and it should be fair to claim it. We all know companies that have 70%, 100% or even 150% from public sources.

Imagine a company, which has cinemas provided by a state or city, great cartel like deal with state funded festival and public television, a trendy bar and concession programme and you ask them what is the ratio of income. Then, let me guess: ticket sales 30% / bar concession, beer, snacks and advertisement 30% / public sources 30% / DVD 0 % / VOD 3 %/ TV sales 7%. This seems to be far more realistic and accurate. And good personal businesses plan, too.

FNE: What’s the marketing campaign you are most proud of? How did you develop the campaign on different windows?

Ivan Hronec: Be2Can Festival, Be2can DVD, Be2Can VOD, Be2Can quality TV: Festival Channel and Film Europe Channel. Film Europe is most likely the only indie distribution company in the world that operates thematic festivals at all levels of distribution and windows, including our own linear and SVOD pay TV channels.

The same stands for Crème de la Crème and Scandi. They started as travelling theatrical events in more than 100 Czech and Slovak cinemas, and at the same time on VOD platforms, DVD editions and Quality TV channels. Such a deliberate programming of the same programming topic across all media cannot be found anywhere in the world. That’s why we launched Film Europe signature label: Be2Can distribution, with Be2Can/events, Be2Can/DVD, Be2Can/VOD and Be2Can/channel. If we combine all of them, our audience runs into millions. We don’t deplete public money, we are reaching and cultivating audience anywhere and everywhere and we are showing the best festival films from the best A festivals. Be2Can Distribution is something to be proud of.

Ivan Hronec: Don’t even think about distributing one individual film because you like it and you think you know how to do it. Either have a solid concept based on topical distribution, or be a cinema owner and buy few films, or be a super friend of state / city support entities.

Summing up, advice is as follows: