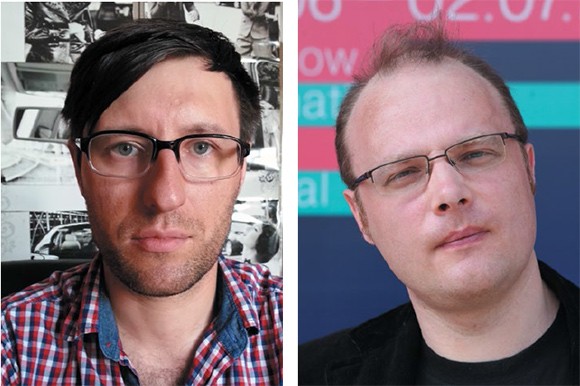 Christmas Eve. A remote private clinic. The policeman KASTYTIS (20) guards a patient suspected of World War II crimes. Kastytis has been on duty for overtime but no one comes to replace him, and his superiors do not get in touch with him. Despite the uncertainty and the clinic's unfriendly staff Kastytis does not leave his post because he believes that a good cop must always complete his assignment.

The nurse JULIJA (23) comes late to her shift. Always chatty, the girl manages to have a joyful word with everyone. Even with Kastytis. Unfortunately her careless treatment of the patient Kastytis is guarding makes him lose his temper. Their quarrel grows into a scuffle – a medicine trolley is knocked on the floor with a bang. An intervention is needed by the on-duty doctor and the security guards.

Left alone, Kastytis feels sorry for overreacting. Julia, who comes to tidy up the room, doesn't want to blame anyone either. The tension dissolves. Later on, Kastytis is addressed by the rest of the clinic's staff. He is invited into the ward of an old and respected patient of the clinic, where everybody gathers to celebrate Christmas Eve. The party is nice and warm and Kastytis begins to feel like a part of a friendly family. However, the idyllic evening is spoiled by an argument about the point and sense of a trial of the disabled WW2 crime suspect that is staying at the clinic.

The same people that were wishing each other kindness and love just minutes ago, begin to throw accusations and insults. Past sins and doings are remembered. The darkness of human infamy unravels before Kastytis' eyes, brightened only by Julia's smile. At that moment, an alarm goes off in the clinic. The clinic's respectful patient goes into a crisis due to fiery debates. The situation is critical – his life can be saved only by drugs, of which... a single ampule is left. And it's been saved for sustaining the life of the comatose war crime suspect. Ironic as it is, the rest of the ampules were broken during the conflict between Julia and Kastytis.

The clinic staff, including Julia, demands Kastytis to co-operate in saving the respectful patient's life. And to forget about the dude he's guarding. Social status is what matters now, even if it is acquired by ways morally indifferent from war crime

Saulius Drunga - Born in 1972. Self-taught cinema dramaturge and filmmaker. Worked with Lithuanian underground filmmakers (as co-writer and consultant). In 2005 one of his screenplays made a good impression on well-known European script editor David Wingate, who recommended author to SOURCES 2 Script Development Workshop, which takes place in Potsdam/Germany. There was developed "Anarchy in Žirmūnai" screenplay – winner of MEDIA New Talent Award at Cannes Film Festival in 2007. The same year Saulius Drunga became gainer of Debut of the Year Prize founded by Lithuanian Cultural Department. Another Drunga’s screenplay “Laura and The Movies” was developed through script development workshop SCRIPTEAST (2008-2009) with such script consultants as Andrew Birkin, Gordon Hoffman, Miguel Machalski and Christian Routh. His debut film "Anarchy in Žirmūnai" from award winning script reached cinema theatres in September of 2010, became most controversial film debut in Lithuania, got nomination for Best Film in annual Lithuanian film awards and was successfully sold abroad. In 2011 film won Best “Perspectives” Competition Film award at International Moscow Film Festival. Currently Drunga works on some film and TV projects. He is still not married.