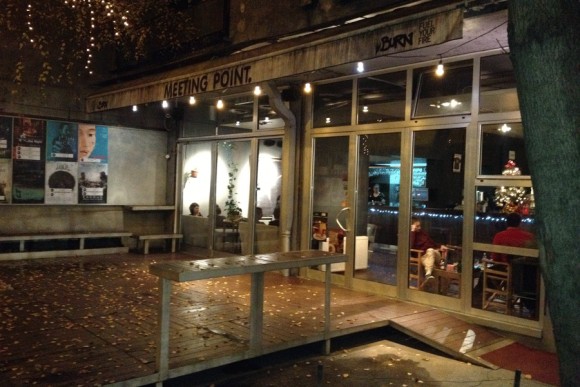 This month we speak with Amer Becirbegovic, the Head of Programming at Obala Meeting Point. Obala Meeting Point is a cult cinema in Sarajevo. It was built in 1997 as a single screen cinema with 191 comfortable seats and a cinema cafe. It hosts the Sarajevo Film Festival, the biggest and most important film event in Bosnia and Herzegovina and the larger region.

In addition to a regular rich programme of contemporary art films, as well as films for young audiences, the cinema is also host to many festivals, film weeks, premieres, special programs and screenings. Meeting Point is the most important art house cinema in Bosnia and Herzegovina and its main aim is to promote film culture with a diverse selection of quality films and a programme for young audiences.

Amer Becirbegovic: Bringing people out of their homes and getting them into the cinema day in and day out and carrying on doing it even when they don’t come.

A.B.: We like to screen quality cinema,and we are able to find quality in many very different films.

A.B.: Indeed, some great programmes have been going on over the years, but first and foremost our cinema is the home of the Sarajevo Film Festival and it is only logical to collaborate and support other festivals and special programs. Last November was particularly busy with special events. There was the Jewish Film Festival (http://sarajevo.festivaloftolerance.com), the Human Rights Film Festival Pravo Ljudski, the Spanish Film Week, and we were also among 56 venues across Europe that have simultaneously screened the opening film of CPH:Dox festival 1989 and participated in a live debate across the continent after it. Some good stuff, really.

A.B.: Europa Cinemas has been supporting our work since the very beginning and we are very grateful for that, especially for that early post-war period. In the mid and late 90's we really needed to feel as a part of something larger and Europa Cinemas helped us with that tremendously.

A.B.: We are in a very central location in Sarajevo, surrounded by different university departments, embassies, galleries, restaurants and cafes, all of which create a unique and quite cosmopolitan high-street culture of which our cinema is a part. We are programming a lot of European and local language films (Bosnian, Croatian, Serbian), significantly more than any other cinema in the country, which is tremendously important for the cultural diversity in a globalised world. We always offer English subtitles for all non-English speaking films, so the international community living in Sarajevo can also have access to quality content in theatres.

A.B.: There is a lot more to be done, that is certain. However, we do work closely with schools and have a number of films on offer for high schools, elementary schools and pre-schools every month. We now want to improve access to cultural events for children with disabilities and are working hard to make a good programme for that.

A.B.: We have been digitialised already for some time now and we are happy with the extra flexibility it brought. We would like to see more classic titles in DCP format becoming available in the near future.