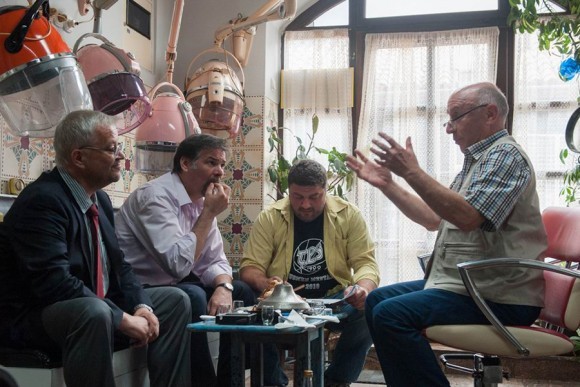 Bosnia and Herzegovina saw four important events in 2015: it hosted the 21st edition of Sarajevo Film Festival, it joined the Film New Europe Association and European Film Promotion and it also witnessed the opening of the Creative Europe Desk in Sarajevo and Banja Luka in November 2015.

A new Cinema Law has been under discussion in the Parliament in 2015. Its approval would lead to the launch of the Bosnian Audiovisual Centre.

A total of 51 films were produced in Bosnia and Herzegovina in 2015 including two feature films. Our Everyday Life / Naša svakodnevna prića by Ines Tanović follows a contemporary Bosnian family as it deals with illness, separation and the consequences of war. The film was produced by Dokument Sarajevo in coproduction with Croatia's Spiritus Movens and Slovenia's Studio Maj. Our Everyday Life has been selected as Bosnia and Herzegovina's candidate for the Foreign Language Academy Award 2016.

Thousand / Hiljadarka by Nenad Đurić, a comedy based on the script of the successful Bosnian-Herzegovinian writer Zilhad Kljucanin, was produced by Heft Production Sarajevo and the Chicago, Podgorica and Belgrade-based company GM Films in association with Moving Stories Theatre.

One international production has been shot in Bosnia and Herzegovina in 2015, Marco Bellocchio’s feature film Blood of My Blood, an Italy/France/Switzerland coproduction between Kavac Film, IBC Movie and Rai Cinema, with SCCA / Pro.ba providing services.

A total of 158 films were distributed in Bosnia and Herzegovina in 2015, compared to 188 in 2014. One Bosnian feature films was distributed in 2015, Hiljadarka by Nenad Djuric (Heft from BiH, RTV Federacije BiH, CINEPLANET Serbia).

On the art house cinema scene there are four cinemas in the Europa Cinemas network with the director of Sarajevo Film Festival, Mirsad Purivatra who is also the manager of Kino Meeting Point cinema in Sarajevo winning the Europa Cinemas 2015 Entrepreneur of the Year Award for the outstanding work of this cinema in the distribution of European films.

The main fund is Sarajevo Film Fund and the grant contest opened in autumn 2015 with the results set to be announced before Christmas 2015. The budget remained the same as in 2014: approximately 1 m EUR for film production and promotion.

The Fund functions within the Federation of Bosnia and Herzegovina, while in the Republic of Srpska there is a film centre with its own funding procedure.

A new Cinema Law has been under discussions in the Parliament in 2015. Its approval would lead to the launch of a Bosnian Audiovisual Centre which will mainly regulate the funding. Elma Tataragić, the General Secretary of the Association of Filmmakers of Bosnia and Herzegovina, said: “The main challenge is definitely the funding. The system that we have now is not really able to support film production. Only in half of the country we have a film fund and the budget for this film fund is a little bit less than 1 m EUR and it’s decreasing every year. The other entity (Republic of Srpska) is in an even worse situation. They have set up an official call for proposals for projects only recently.”

“So the law is very precise in how the funding will function and how it can work for obtaining more money for the cinema because the cinema does not waste money, it also brings a lot of money back. As most of the feature films made here are coproductions, we did a little math: if a film gets about 100,000 EUR from our Film Fund, it will bring five times more to the city, including local employees, hotels, food, services etc ", said Elma Tataragić.

It is also expected that the new legislation will decentralise film production, which for now focuses mainly on Sarajevo. “This new legislation will open up space for dispersing film production to other film centers such as in Herzegovina, which has a strong documentary film festival that has made people there aware of documentary filmmaking. There is also Banja Luka with a new generation of filmmakers coming up”, said Tataragić.

There is no tax incentives scheme yet, but according to Elma Tataragić it will be the next step.

ASSOCIATION OF FILMMAKERS OF BOSNIA AND HERZEGOVINA

MINISTRY OF CULTURE AND SPORTS

FILM CENTER OF REPUBLIC OF SRPSKA

THE NATIONAL FILM ARCHIVES OF BOSNIA AND HERZEGOVINA

Sources: Association of Filmmakers in Bosnia and Herzegovina