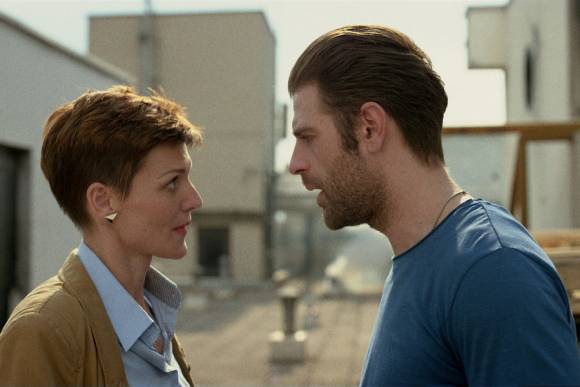 Death in Sarajevo by Danis Tanović

The year 2016 started on an optimistic note for the film industry in Bosnia and Herzegovina. Death in Sarajevo by Danis Tanović, produced by SCCA/pro.ba in cooperation with Margo Films (France) and France 3 Cinéma, premiered in the 66th Berlin Film Festival’s International Competition, winning the Silver Bear Grand Jury Prize and the FIPRESCI Prize. This success could not balance the negative trend of cutting down the production support in the country as the Film Fund allocated only 651,385 EUR for the development, production and coproduction support in 2016.

A new Cinema Law, which was discussed in the Parliament in 2015, still hasn't seen the light of day and the Bosnian Audiovisual Centre has not been launched, leaving the Association of Filmmakers of Bosnia and Herzegovina to handle most of the promotion, strategy making, lobbying and networking for the film industry in Bosnia and Herzegovina.

The year 2016 saw the production of five feature films, that are expected to premiere in 2017.

Those Dark Nights by François Lunel, produced by Bosnian company Rose Films in coproduction with French companies Promenades Films and Sycomore Films, is a war story about 28 year old Haska who, after losing her husband, decides to leave besieged Sarajevo through the mountains with her 9 year old son Denis.

Two debut features shot in 2016, both deal with post-war reality of Bosnia and Herzegovina. Men Don't Cry / Muškarci ne plaču directed by Alen Drljević and produced by Deblokada in coproduction with Živa, is a story of war veterans who fought on three different sides during the war and are brought together at workshops by an international peace organisation.

The Frog / Žaba directed by Elmir Jukić and produced by Refresh in coproduction with Skopje Film Studio, Living Pictures and Propeler filmom, is an adaptation of a hit theatre play about the search for love and meaning in the country stuck in the process of transition.

Dead Fish Float on Their Backs / Mrtve ribe plivaju na leđima, directed by Kristijan Milić and produced by Oktavijan in coproduction with Eurofilm, was shot in Mostar and covers a complex story of 42 characters all connected to a retired teacher who committed suicide.

Herzegovinian production house Kadar coproduced The Eighth Commissioner / Osmi povjerenik, a debute feature directed by Ivan Salaj and produced by Alka film, telling the story of an ambitious politician Siniša Mesjak, who ends up living on the island of Trečić.

Cristi Puiu's Sieranevada was coproduced by 2006 d.o.o., Mirjana Karanović's A Good Wife by Deblokada, while Vlado Škafar's Mother, Goran Kapetanović's My Aunt in Sarajevo, Damjan Kozole's Nightlife and Dane Komljen's All the Cities of the North, were all coproduced by SCCA/pro.ba. For these feature films Bosnian and Herzegovinian production companies cooperated with partners from Croatia, France, Italy, Macedonia, Montenegro, Romania, Serbia and Slovenia.

Long documentary White Road / Bijeli put, directed by Zdenko Jurilj and produced by Kadar, tells the story of a convoy of 90 trucks of humanitarian aid that travelled through the front lines during the war in Bosnia and Herzegovina to Central Bosnia, just to get attacked on their way back.

Remy Ourdan's and Patrick Chauvel's Siege / Opsada, produced by Agat Films & Cie, Arte France, INA and SCCA/pro.ba, concentrates on the ordeal of citizens of Sarajevo during the longest siege in modern history.

Scream for Me Sarajevo, directed by Tarik Hodžić and produced by Prime Time, tells the story of the times when Bruce Dickinson came to Sarajevo to hold an underground concert.

Stefan Malešević introduces us to Gorani, people living in remote mountain villages situated on the borders of Kosovo, Albania and Macedonia, in his long documentary Gora produced by Slovofilm.

Under the Cover concentrates on head-scarfs and the lives of young Muslim women who decided to wear them as an expression of their faith. The film was directed by Nejra Latić Hulusić and Sabrina Begović Ćorić, and produced by Hava Film.

Six short fiction films and one short animated film were also released in 2016.

There was just one film produced in Bosnia and Herzegovina, Death in Sarajevo, that was released in 2016. The film had five screenings during the Sarajevo Film Festival and 1,641 admissions and 4,204 EUR gross in regular cinema distribution.

Bosnia and Herzegovina hosted the 22nd Sarajevo Film Festival in 2016, as well as a number of smaller film festivals. As problems with funding in all spheres of culture are evident, it was not surprising that a well-known festival, Kratkofil Plus from Banja Luka, had to close down in March 2016.

Most films in Bosnia and Herzegovina are screened in five multiplexes: Cinema City in Sarajevo, Multiplex Palas in Banja Luka, CineStar Mostar in Mostar, Multiplex Ekran in Zenica and Cinestar Bihać in Bihać.

Three of the five multiplexes (Cinema City, Multiplex Palas and Multiplex Ekran) are part of the Europa Cinemas Network and part of their programmes is dedicated to artistic, predominantly European films. The most important Bosnian and Herzegovinian art house cinema is still Cinema Meeting Point, another member of the Europa Cinemas Network, that is run by the Obala Art Center, the organisation behind the Sarajevo Film Festival.

Operation Kino, in cooperation with Reelport GmbH, established a Video on Demand platform offering to the audiences from Bosnia and Herzegovina a number of titles participating in the project, as well as masterclasses and interviews.

As ticket prices vary depending on the city/town where the cinema is located and on the fact that tickets for 3D screenings are more expensive than for 2D, there is a slight difference between the admissions top ten and the box office.

Two comedies coming from Serbia managed to get in the admissions top ten in 2016 ranking 7th and 8th: Military Academy 3, directed by Dejan Zečević and produced by Nira Pro, with 17,947 admissions and The Flock, directed by Nikola Kojo and produced by K-12, with 17,860 admissions. Warcraft: The Beginning (3D) closed the list with 16,877 leaving Batman v Superman: Dawn of Justice and Rouge One off it.

In 2016 the Film Fund in Bosnia and Herzegovina continued the practice of opening the call for applications at the end of the year, so the list of winning projects was announced in January 2017. Danis Tanović, Jasmila Žbanić and Ines Tanović received support for the production of their feature films 9034, Srebrenica and Son. Four more minority coproductions, including new films by Nuri Bilge Ceylan and Srdan Golubović, were supported.

As the Film Fund is allowed to allocate funding only to production companies registered in the Federation of Bosnia and Herzegovina, production companies from Republika Srpska depend on the willingness of the Ministry of Education and Culture of Republika Srpska to open a call for co-funding of film projects. The Ministry opened a call in August 2015 allocating 51,129 EUR to one feature film and four long documentaries.

A new Cinema Law, which was discussed in the Parliament in 2015, still hasn't seen the light of day and the Bosnian Audiovisual Centre has not been launched, leaving the Association of Filmmakers of Bosnia and Herzegovina to handle most of the promotion, strategy making, lobbying and networking for the film industry in Bosnia and Herzegovina. With the Film Fund implementing cuts in “co-financing of complementary activities”, the Association of Filmmakers will face difficulties with organising its activities in 2017.

None of them funds feature films, but all of them produce both short and long documentaries. Until a few years ago, they were involved in the coproduction of feature films, so film professionals are hoping that the new Cinema Law will encourage their involvement in feature film production once again.

The most important private TV channels in the country are Al Jazeera Balkans and Hayat TV. Al Jazeera produces independent documentaries and Hayat TV is involved in the production of smaller scale sitcoms from time to time. In the last years Face TV also produced several documentaries.

ASSOCIATION OF FILMMAKERS OF BOSNIA AND HERZEGOVINA
Branilaca Sarajeva 20/3, 71000 Sarajevo
Phone / Fax: +387 33 667 452
This email address is being protected from spambots. You need JavaScript enabled to view it.
www.bhfilm.ba

THE NATIONAL FILM ARCHIVES OF BOSNIA AND HERZEGOVINA
Alipašina 19, 71000 Sarajevo
Phone / Fax: +387 33 668 678
This email address is being protected from spambots. You need JavaScript enabled to view it.