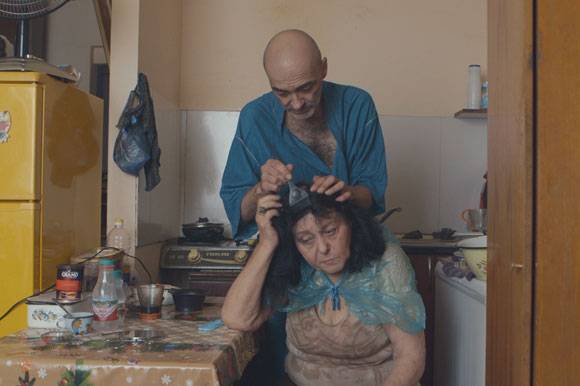 TBILISI:  Georgian director Ekaterine Chelidze is in postproduction with Dead Souls’ Vacation, a long documentary that she shot in Georgia in 2018. The film is produced by Konstantine Kalandadze and Elene Margvelashvili through Parachute Films.

Levan (45), formerly a popular bass player in Georgia, lives in physical and mental isolation in a small apartment with his overly controlling mother Lamara (81). Long forgotten by everyone, Levan has no luck at finding a job or a girlfriend. Despite his best efforts to prove his worth, Levan’s attempts to change his fate are absurd, while Lamara’s main concern is to make sure that her son is well-fed, dressed appropriately, but most importantly, not affectionate with a woman unworthy of his love.

„The initial idea was to make a documentary about an ill-fated musician in his 40s, who used to be one of the most in-demand bass players in Georgia in the ‘90s, but who didn’t manage to establish himself. But when we stepped inside Levan’s home and began shooting, it became obvious that his life has been determined by his unusual relationship with his mother. So the central theme of the film became boundaries, both physical and personal, which have been compromised throughout Levan’s life“, Chelidze told FNE.

The documentary is produced by Konstantine Kalandadze and Elene Margvelashvili through Parachute Films, and it received a production grant of 18,333 EUR / 55,000 GEL from the Georgian National Film Center in 2018. It is also supported by Parachute Films with 15,666 EUR / 47,000 GEL in full technical support and the investment of authors. The total budget is 34,000 EUR / 102,000 GEL.

Principal photography took place in Tbilisi throughout September - May, 2018-19.

„The film is in the rough-cut stage and we have just started to submit it to various festivals. The premiere is planned for the autumn of 2019. The priority for us are IDFA, DOK Leipzig and Visions du réel“, Margvelashvili told FNE.

Production Information:
Parachute Films
This email address is being protected from spambots. You need JavaScript enabled to view it.