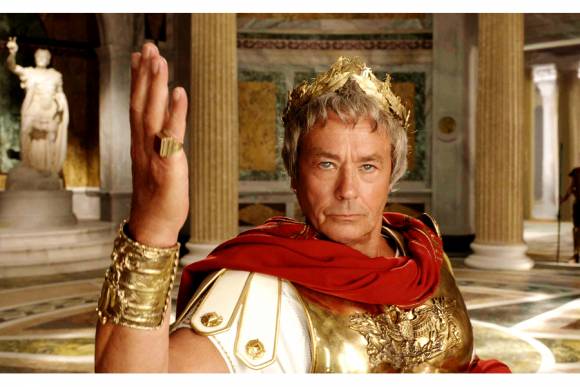 The enigmatic rebel of French cinema, a European film icon, and one of the world’s most beloved actors, the legendary Alain Delon comes to Romania for the first time as a special guest of the 16th edition of the Transilvania International Film Festival (June 2-11). The French star, who is often cited as one of the most beautiful men of all time, conquered the hearts and minds of the audiences during the golden age of European cinema.

Transilvania IFF will award Alain Delon the Lifetime Achievement Award for exceptional artistic contribution at the closing gala, on June 10th. In his honor, on June 9th, the Unirii Square will host a special screening of Pour la peau d’un flic/ For a Cop’s Hide (1981), a thriller directed by the great French actor and which also features Delon in the starring role.

This year the 81-year-old Delon celebrates six decades since his cinema debut, which launched an impressive career spanning over 100 memorable screen roles, as well as behind-the-screen credits as producer, writer, and director. Rocco e i suoi fratelli/ Rocco and His Brothers (1960), Plein soleil / Purple Noon (1960), L’Eclisse / The Eclipse (1962), Il Gattopardo / The Leopard (1963), La tulipe noire / The Black Tulip (1964), Le Samouraï / The Samurai (1967), Borsalino (1970), Notre histoire / Our Story (1984), and Parole de flic / Cop’s Honor (1985) are only some of the titles which have made Delon one of the most important French actors of the 20th century.

Born on November 8, 1935, into a troubled childhood and later an adventurous adolescence, Delon was not clearly set out for the resounding success that he registered when he was only 23. His magnetic beauty and personal charm made him a target for Hollywood, but, despite being given the opportunity to be cast in one of David O. Selznick’s movies, Delon decided to start his career in France, where in 1957 he appeared in Yves Allégret’s Quand la femme s'en mêle / Send a Woman When the Devil Fails. In 1958 he stars in Christine alongside Romy Schneider, the charming actress who later becomes his fiancée.

Delon was nominated for a Golden Globe for his role in Luchino Visconti’s 1964 Il Gattopardo / The Leopard, and for a César in 1977 for his starring role in Joseph Losey’s Mr. Klein. He was  later awarded Best Actor for his role in Bertrand Blier’s 1985 Notre histoire / Our Story. The Berlinale awarded Delon a honorary Golden Bear in 1995, and in 2005 President Jacques Chirac made Delon an Officer of the Légion d’Honneur for his contribution to cinema.

In his career, Delon received festival, box office, and fan recognition, and worked with Luchino Visconti, Jean-Luc Godard, Jean-Pierre Melville, Michelangelo Antonioni, and Louis Malle, among others. Of all his collaborators, Delon considers Jean-Pierre Melville to be best as a director.  Le cercle rouge / The Red Circle (1970), in which Delon plays a recently released convict preparing for his next crime, will be screened at TIFF as part of a Jean-Pierre Melville Retrospective.

A symbol of masculinity, Delon inspired the fashion and beauty industry, as well as pop culture. He has his own brand of luxury perfume and accessories, and he features on The Smiths’s cover for The Queen is Dead album. Madonna’s song “Beautiful Killer” on the MDNA album is a tribute to the iconic actor.

Tweet
More in this category: « Films from South-Eastern Europe and Georgia are the Big Winners at goEast 2017 Call still open - Szczecin European Film Festival '17 »
back to top