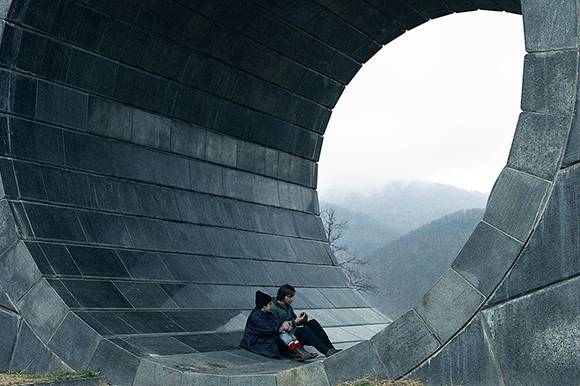 The Load by Ognjen Glavonic

The 71st Cannes Film Festival, May 8th to 19th, 2018, will include Ognjen Glavonić’s The Load in the ‘Directors’ Fortnight’ ('La Quinzaine des réalisateurs'), while the Anja Kofmel’s film Chris the Swiss and the short film Third Kind by Yorgos Zois will screen in the 'La Semaine de la Critique' section. All three films are minority Croatian co-productions. Oliver Sertić will participate in the Producers on the Move platform, while the Croatian Audiovisual Centre (HAVC) will again, this year, promote Croatian cinematography at the Film Market.

Vlada (Leon Lučev) works as a truck driver during the NATO bombings of Serbia in 1999. His mission is to transport a mysterious load from Kosovo to Belgrade and on the way drives through war ravaged locations. When he completes his task, Vlada has to return home and face the consequences of his actions.

The ‘Directors’ Fortnight’ (La Quinzaine des Réalisateurs) will take place, for the 50th time, in parallel with the Cannes Film Festival from May 9th to 19th. The programme presents new names in directing, highlighting authors with a strong and unique poetic. Throughout the history of the programme, the attention of audiences and critics has been attracted by some of today’s most renowned film directors including: Werner Herzog, Martin Scorsese and Ken Loach. More information is available at this link.

Chris the Swiss is about a young Swiss reporter killed during the war in the former Yugoslavia. While the director exposes the circumstances surrounding his death, animated scenes are woven through documentary footage.

Anja Kofmel wrote and directed the film, and the Croatian co-producer is Siniša Juričić (Nukleus Film).

The Earth has long been abandoned, and people have found sanctuary in space. Three archaeologists return to the planet in order to explore the origin of a mysterious signal made up of five tones.

La Semaine de la Critique is the oldest out-of-competition section of the Cannes Film Festival and will take place this year, for the 57th time, from May 7th to 19th. The section screens first and second films from directors from around the globe and in that way stays true to its tradition of discovering new talent. Names like Bernardo Bertolucci, Alejandro Gonsález Iñárittu and Gaspar Noé have all had their films screened in this programme. More information is available at this link.

Oliver Sertić in Producers on the Move

European Film Promotion has selected Croatian producer Oliver Sertić to participate in the Producers on the Move platform, taking place in parallel with the Cannes Film Festival from May 10th to 14th. Producers on the Move is a networking platform aiming to promote European co-productions. Participants will attend lectures, workshops, pitching sessions and ‘one-on-one’ meetings with film experts. They will have the opportunity to receive promotional space in international industry publications. The platform, along with Sertić, will include 19 other participants. For more information and a full list of participants please visit the EFP’s official website.

The HAVC will, for the 11th year in a row, present Croatian cinematography at the Film Market (Marché du film). Market-screenings will include: Antonio Nuić’s feature film Mali, Lada Kamenski, a feature film by Sara Hribar and Marko Šantić, Bobo Jelčić’s feature film All Alone, and Days of Madness, a feature documentary film by Damian Nenadić.

Furthermore, HAVC representatives will, through publications, meetings and digital platforms, present film professionals at the market (buyers and festival selectors) completed Croatian films of all themes and genres. The HAVC will also be available, for both logistical and lobbying purposes, to all Croatian authors and producers in Cannes who will be discussing current and future projects.

For short film promotional purposes, the HAVC has reserved a place for Croatian films at the Short Film Corner – a platform for short film professionals that includes meetings, exchange of ideas, networking, and promotion. Films included are: After Party by Viktor Zahtila, Almost Nothing: So Continues the Night by Davor Sanvincenti, Blink by Jakov Labrović, The Cleaning Lady by Matija Vukšić, Cyclists by Veljko Popović, How Steel was Tempered by Igor Grubić, The Lovetts by Igor Bezinović, Marica by Judita Gamulin, Safe Flight by Aldo Tardozzi, ‘The Stranger’ In my Head by Petra Balekić and White Trash by Sunčica Ana Veldić.

Tweet
More in this category: « Meet the Tallinn Black Nights Film Festival and Industry@Tallinn representatives in Cannes! Focus Bulgaria and Back in the USSR »
back to top