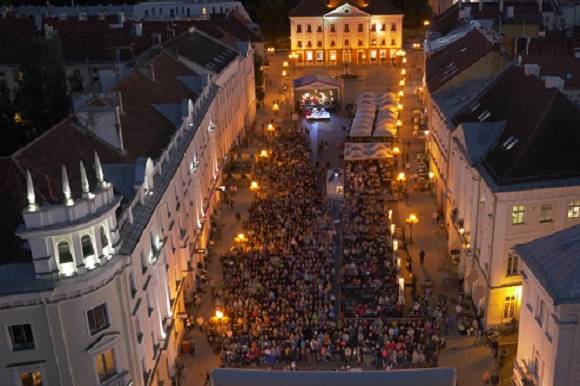 The 13th Tartu Love Film Festival, organised by the team at the Tallinn Black Nights Film Festival, has announced its full lineup, consisting of 11 features and three documentaries, including the Baltic premiere of the Berlinale Gold Bear winner, provoking docu-feature hybrid Touch Me Not, directed by Adina Pintilie.

Tartu Love Film Festival aka TARTUFF, running from the 13th until the 18th August, is the biggest open-air film festival in the Baltics. It occupies the Town Hall Square of Tartu for a week, with two films screened to an audience of around 3000 people every evening. The screenings of documentaries take place in the historic Athena theater.

Russian director Ivan I. Tverdovski, who’s Correction Class won the audience award at TARTUFF in 2014 will attend the festival in person this year to present his latest film Jumper, the third part of his trilogy about the abnormalities of life in contemporary Russia. Operating again on the border between fantasy and realism, Tverdovski tells a tale about a biologically anomalous boy whose tolerance to pain inspires his mother to lead him on a criminal path. The film has already gained critical praise and won the Special Jury Prize at Karolvy Vary Film Festival. Leading actress Anna Slju will also attend the screening.

Another hit on the festival circuit (Berlinale, Tribeca etc) is Laura Bispuri’s Daughter of Mine that sees two women (the biological and foster mother) fighting for the love and custody of their daughter.

Gabriela Pichler’s tragicomic Amateurs arrives after an impressive festival run, having screened at Rotterdam, Tribeca and Gothenburg, where it won the Best Nordic Film award. Telling a bittersweet tale about adaptation and the transforming identities of migrants and “natives” in a quiet former mining town in Sweden.

In addition to Touch Me Not, TARTUFF’s documentary programme includes RBG, a portrait of the legendary women’s and human rights defender, judge Ruth Bader Ginsburg and road documentary Tanzania Transit that offers, through the portraits of Tanzanian train travellers, a colorful look at the country, that is, like most other societies, troubled by racial and ethnic prejudice and intolerance.

The festival will be opened with the screening of a 50-minute performance "Põhjavaim" (Northern Spirit) where scenes from 50 Estonian films are blended with dream-like visual projections on the walls of adjacent buildings backed by choir music performed live by a 400-member mixed choir. The video is directed by Estonian director Jaak Kilmi, while Küllike Josing oversees the musical direction and artist Alyona Movko provides the visuals.

Last modified on 2018-08-07
Tweet
More in this category: « Transilvania Pitch Stop Calls for Entries! Human rights in cyberspace and in distant parts of the world. This year, One World will show 128 films and has invited 120 international guests »
back to top