goEast Doing Everything To Ensure Festival Can Take Place As Planned (from 5 to 11 May, 2020) in Spite of Covid-19 – Online or Offline

Neo-Noir Thriller THE SERVANTS by Ivan Ostrochovský Selected to Open goEast // From the Collective to the Individual – The Documentary Films of the Competition // Marking 75 Years Since Liberation: THE PAINTED BIRD and Master Class with Václav Marhoul + PERSIAN LESSONS at the Matinee

goEast is continuing to plan for the case that travel restrictions and prohibitions on assembly in Europe will be relaxed again in May and the festival will be able to take place as scheduled from 5 to 11 May, 2020. At the same time, the festival organisers are exploring alternative options for the worst-case scenario.

If everything goes according to plan, the 20th edition of goEast – Festival of Central and Eastern European Film will begin radically, in black and white. A sombre car ride draws viewers into Ivan Ostrochovský’s neo-noir thriller THE SERVANTS, based on a screenplay by IDA author Rebecca Lenkiewicz. Before the engine has even had a chance to cool down from the drive, the audience is presented with the corpse of a Catholic priest. It’s 1980, and the church in Czechoslovakia is torn between the demands of the faithful and political power games. Following the election of the anti-communist Karol Wojtyła to the position of pope in 1978, more and more priests have begun to take their cues from the West. The regime is not amused at the actions of these spiritual defectors and strikes back with a vengeance. With his meticulously composed images, Ivan Ostrochovský has created an uncompromising plea for the separation of church and state.

The documentary films in the Competition section at goEast represent a journey through Central and Eastern Europe, from communist collectives to individual sojourns in the past and present. In STATE FUNERAL, Sergej Loznitsa employs unique archival materials from the large public mourning ceremony for Joseph Stalin to reflect on the history of the Soviet Union, inviting viewers to ponder the grotesque charade. In IMMORTAL by director Ksenia Okhapkina, former inmates submit to a strict social order, thus mirroring the collective fate of Soviet citizens. Nadia Parfans’ HEAT SINGERS offers a humorous depiction of the staff of a combined heat and power station – the film became a surprise box office hit in Ukraine. The protagonists here struggle with an utterly dilapidated district-heating network in the city of Ivano-Frankiyvsk. 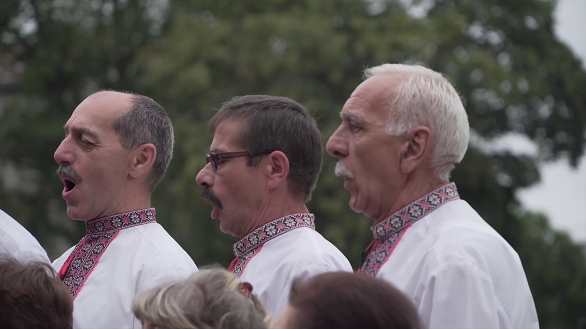 In TWO ROADS, a documentary film about the Czech band “The Tap Tap”, Radovan Sibrts presents a humorous portrait of the everyday ups and downs in the lives of physically challenged individuals. And nature reigns where humankind declines to make its own rules in Ilya Povolotskiy’s FROTH, an empathic story about generational conflicts on the banks of the Barents Sea. In LESSONS OF LOVE by Małgorzata Goliszewska and Katarzyna Mateja, 69-year-old Jola asks herself existential questions at the end of a physically abusive marriage while managing to rediscover love.

Events such as the racially-motivated violent acts in Hanau demonstrate that right-wing hate is still omnipresent 75 years after the end of the Second World War. In his nearly three-hour-long black-and-white epic THE PAINTED BIRD, Václav Marhoul has adapted Jerzy Kosiński’s eponymous war novel for the screen and made the scourge of hatred of the other tangible. During World War Two, an unaccompanied adolescent refugee boy wanders from village to village in Central Europe, confronted with atrocity everywhere he turns. At its world premiere in Venice, THE PAINTED BIRD was the subject of heated discussion for its explicit depiction of violence. In the Czech Republic, the film has received ten Czech Lions in the meantime. Václav Marhoul (Prague, 1960) is active as an actor, director and producer. For THE PAINTED BIRD, he not only brought together big names like Stellan Skarsgård, Harvey Keitel, Udo Kier and Barry Pepper in front of the camera – he also created an artificial “inter-Slavic” language for the cast during the film’s seven-year production phase. In the scope of a master class, Marhoul will speak about the film’s production history, as well as subjects such as on-screen violence, uncompromising approaches to art, European unity and his fascination for World War Two history.

PERSIAN LESSONS at the Matinee

Meanwhile, PERSIAN LESSONS, featuring Lars Eidinger in the leading role, offers an entirely different perspective of the 75th anniversary of liberation in Europe. A language has been invented here too, this time however as a central element of the plot: the year is 1942 – the young Belgian Gilles pretends to be Persian, thus narrowly escaping execution at the hands of the SS. In a concentration camp, it becomes clear why he was spared: Officer Koch wishes to learn Farsi, in order to be able to open a restaurant in Teheran after the war. That’s where Gilles comes in. The imposter proceeds to make up his very own version of Farsi – a deadly serious game that is constantly in danger of discovery. Based on Wolfgang Kohlhaase’s novel “Erfindung einer Sprache”, Russian director Vadim Perelman stages an intensive drama that draws its power from the nuanced performances of his two leads, Lars Eidinger as Officer Koch and Nahuel Pérez Biscayart as Gilles.

The full programme for the 20th edition of goEast – Festival of Central and Eastern European Film will be announced in mid-April.

Last modified on 2020-03-23
Tweet
More in this category: « Press Release of the Cannes International Film Festival
back to top