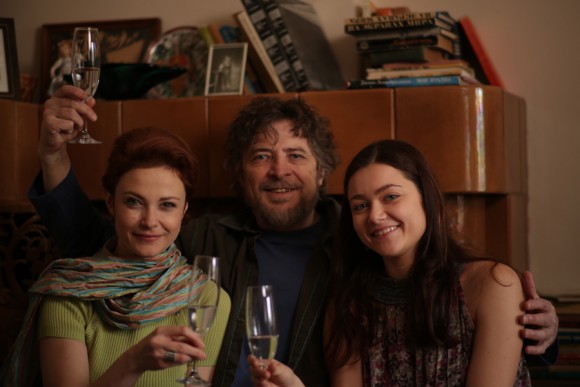 Renowned for his original talent and unconventional style, Silver Bear-winning Bulgarian director Georgi Djulgerov (Advantage, 1977) is in postproduction on his 15th feature, Buffer Zone. The young company Front Film, run by the director’s ex-students, Nadejda Koseva and Svetla Tsotsorkova, was awarded with 472,430 EUR by the Bulgarian National Film Center (NFC) for the project.

It's been presold the film to Bulgarian National Television and has attracted Nu Boyana Film Studios and Audiovideo Orpheus as co-producers.
The plot focuses on the different states of a man who, after a car accident in which his wife is killed, remains half-blind. “The story is inspired by my own life,”  Djulgerov told FNE. "At the same time, when I was writing the script I had no idea I will lose one of my eyes. Now the film is prophetic to me."

Shot mostly on locations on the salt lands near the Black Sea town Burgas and in the mountainous Leshten village, the production also constructed two major sets symbolizing “the buffer zone between life and death.”

The main character Todor Cherkezov, performed by Djulgerov’s favorite actor and constant collaborator Rusi Chanev, enters as a living man and goes out as a dead one. “He is a 'me' character and I made him fall into several dreams, which at first glance have no narrative link," the director said. "The audience will gradually realize that this character is moving in a kind of purgatory.”

Some 58 actors took part in what the director calls the “material mystery” in which he does not intend to include any computer-generated effects because he “dreamed it as realistic cinema.”

Famous for his generosity as professor at the Sofia Film Academy, Djulgerov is grateful to his actual producers and ex-students for their creative support. Having up to now edited his films by himself, he now counts on Antonia Milcheva as “his second sight.”