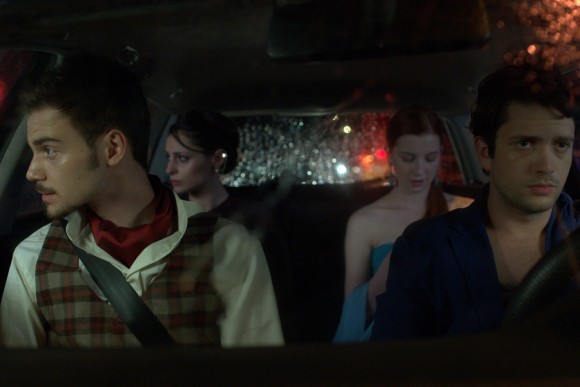 The script written by Hristoskov follows the painful experiences of four school graduates, who deliberately leave their farewell ball. Athletic Nick, socially committed Jenny, melancholic Sonny and an anxious young man nicknamed the Goat gather in a small car during the night of 24 May and experiencе a series of evocative events. The film stars Martin Dimitrov, Milena Ermenkova, Teodor Hristov and Desislava Kasabova.

“The two couples grew up in the time of digital technology. They are typical representatives of the Generation Y. The aim of my coming-of-age drama is to focus on the reversal from the seductive world of technologies to the passions of real life,” Hristoskov told FNE.

The film was produced by Incoms Project with a budget of 230,000 EUR. It was supported by the Bulgarian National Film Center as a low budget film.

Shooting took place in May-June 2015, mainly during the night on the streets of Sofia. The car, the mobile phones, the pictures, the videos, the social networks communications and the rain are strongly present as visual elements.

Hristoskov’s debut feature No 1 (coproduced by the Bulgarian National Television and Incoms Project) focusing on the war between two schools located in a poor neighbourhood of Sofia, grabbed the award for Best Bulgarian Film at the Golden Rose Film Festival in 2011.

Eighteen will also compete in the 1st and 2nd Films Competition programme of the 32nd Warsaw Film Festival (7-16 October, 2016). The film will be domestically released in 2017.