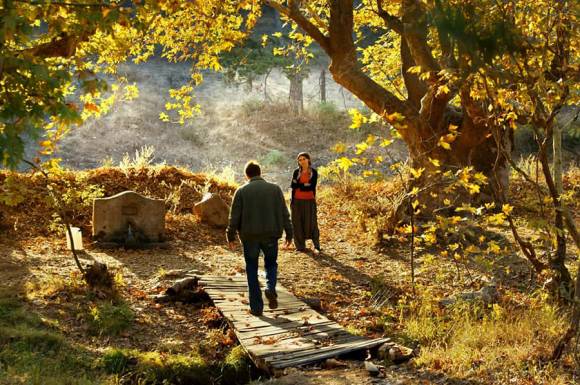 CANNES: Turkish director Nuri Bilge Ceylan is back in competition in Cannes with The Wild Pear Tree four years after winning the Palme d’Or with his Winter Sleep. The film is a coproduction between Turkey, Germany, Bulgaria, Bosnia Herzegovina, Macedonia, Sweden and Qatar although this is no pudding with Ceylan’s unmistakable style undiluted by the complexities of a seven country coproduction.

At three hours running time the film has to be visually and verbally meaty to hold the viewer’s attention which it manages to do.  Ceylan manages to combine layers of meaning with his characters’ dialogues that are part of his visual landscape. Ceylan wrote the script together with his collaborator and wife Ebru Ceylan and Akın Aksu who also acts in the film. What makes the film so masterful is that Ceylan combines a serious look at religion, politics and family relationships with a touch that is both light and profund.

The story is shot on Ceylan’s home turf as the director hails from the city of Çanakkale and the surrounding region.  The core of the story is the relationship between encapsulated by a line Sinan played by Aydin Doğu Demirkol and his father Idris played by Murat Cemcir.  Ceylan has made a bold choice both in the casting and the drawing of Sinan because the character is not really very sympathetic.  Kudos to Demirkol for having the courage to play this without trying to make himself attractive.

Sinan comes from a modest background and has just returned to his village after finishing his studies at the college in the city of Çanakkale.  His father Idris is a teacher in the village who insisted on his son going on the further education despite this clearly not being the norm in the village.  Sinan who is obviously a young man of modest talents dreams of being a writer although he has studied to be a teacher and will soon sit his exam to qualify as a teacher.

His mother Asuman played by Bennu Yıldırımlar and sister Yasemin palyed by Asena Keskinci greet his return to the family home casually and ask what good all his books ever did him.  They are clearly more interested in watching television soaps than engaging with Sinan who takes up a lazy lifestyle lounging on his bed in his room and reading rather than making any attempt to help out around the house.

His father Idris while warm and kind is a gambling addict who has impoverished his family with this addiction and dreams of a life in the countryside after his retirement.  He has a rocky and unproductive patch of farmland that he dreams can be turned into a garden if only the well his has been digging for years will strike water and irrigate the land.  He recruits Sinan to come along and help him dig but Sinan is lazy and contributes little to his father’s work.

Meanwhile Sinan continues to try to find a way to publish his writing.  No publisher is interested unless Sinan can pay for the cost of the publishing himself and without even digging into this project we already know that Sinan is talentless but not ready to accept this.  One of the most telling scenes in the film is an extended dialogue between Sinan meets up with an established local author Süleyman played by Serkan Keskin and proceeds to insult the author while at the same time somehow seeking his approval.  Süleyman listens patiently for a while then tries to escape but Sinan follows him down the street continuing to undercut his own cause.

Sinan does not respect his father and is angry about the gambling debts Idris has run up but in a moving scene his mother says that she still loves Idris and stands up for him telling Sinan that if it were not for his father he would never had the chance to go on to study to be a teacher.  Sinan continues as unsympathetic as ever making off with money from his desperately hard up family to publish his useless writing which nobody wants to read.

In the end it is the love of his father and his father’s acceptance of Sinan that is the most moving point in the film.

Ceylan has an enormous visual sense and he shot his early film’s himself with his camerawork part of what earned him his international reputation. A Wild Pear Tree was shot by cinematographer Gökhan Tiryaki who delivers the stunning long shots and visuals that Ceylan’s fans have come to expect.  This is a film destined for festivals and art-house distribution all over the world with Ceylan already having an established following of fans.