Born as a natural continuation of his background as an economist and a film critic, Stefan Kitanov founded Bulgarian distribution company Art Fest in 2001. 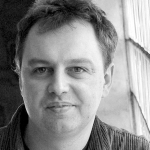 Kitanov created a model of combining management of the Sofia Cinema House with the enlarging the popular Sofia Film Fest and the industry-oriented "Sofia Meetings." The convergence of festival, cultural, and commercial activities turned Art Film into a positive force for promotion of European cinema in Bulgaria. In addition, Kitanov has become a producer of films by talented Bulgarian filmmakers Teddy Moskov (Rhapsody in White, 2002), Rangel Valchanov (Which Way Today, 2007) and most recently Stephan Komandarev (The World is Big and Salvation Lurks around the Corner).

Art Fest recently added two new titles: Palermo Shooting by Wim Wenders and Delta by Kornel Mundruczo. "With a package of European films we want to organize a 'traveling film event' in medium and small Bulgarian towns. We believe that this kind of 'alternative distribution' could help the 'difficult' films to be at least temporarily released,' Kitanov says, summarizing his vision for the future of Art Fest.