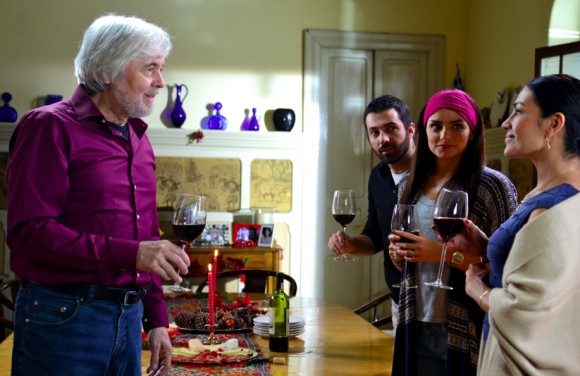 PLZEN: Producer Ales Hudsky, attending the Finale Plzen film festival for the presentation of upcoming Czech films on 26 April 2013, told FNE that his international coproduction has moved into postproduction following the completion of final filming in Mexico in mid-April.

Little Baby Jesus (Prijde letos Jezisek?) is the second feature from Czech writer/director Lenka Kny, who also produces through her company Blue Time. Hudsky’s company Synergia Film was a coproducer on Kny’s debut film. Synergia Film teams up with Mexico’s Machete Producciones, Slovakia’s Trigon Production and Cineart TV Prague on the story of the 30-year old daughter of a Czech émigré and his Mexican wife who travels to Prague to pray for a miracle from the Infant Jesus of Prague. Romantic entanglements ensue, and the young woman’s prayers are answered nine months later, when she gives birth. The leading roles are played by Josef Abraham, Dolores Heredia (recently seen in the Mel Gibson starrer Get the Gringo) and rising young model-actress Aislinn Derbez.

The story, which was originally intended to be a coproduction with Spain, received a slight edit (following Spain’s financial crisis) when Hudsky met Machete Producciones producer Edher Campos at the Karlovy Vary IFF when Campos was presenting his second film Nos vamos, papa. Mexico is providing 20 percent of the film’s 2 m EUR budget. Slovakia is covering 10 percent of the budget, with funding from the Slovak Audiovisual Fund. Slovakia is also providing the DoP (Sasa Surkala) and several cast members, as well as the talents of Trigon producer Patrik Pass, who will supervise the film’s editing. Pavel Hrdlicka, whose recent credits include the acclaimed Agnieszka Holland three-part film Burning Bush, will edit.

The Czechs are providing 70 percent of the budget, through Central European Media Enterprises (CME) station TV Nova, private funding (largely through product placement), and support from Czech Tourism, which has made a recent move into tourism promotion through film.

The film is scheduled to premiere in the Czech Republic on 1 November 2013 through distributor Bontonfilm and will open in Slovakia and in Mexico in early December.